Brian Hastings To Appear on Poker After Dark

Brian Hastings, a poker coach for online tuition site CardRunners, has revealed that he will be making his first appearance on NBC’s ‘Poker After Dark’, posting to his blog to inform all of his readers about the news. With Full… 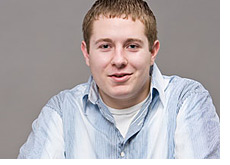 Brian Hastings, a poker coach for online tuition site CardRunners, has revealed that he will be making his first appearance on NBC’s ‘Poker After Dark’, posting to his blog to inform all of his readers about the news.

With Full Tilt Poker professionals Phil Ivey and Tom Dwan both being regular faces around the table in the televised game, Hastings has revealed that he will be entering into a poker game at $300/$600 stakes within his preferred Pot Limit Omaha poker variant.

Entry into the match up is no easy task, each playing having to buy into the match for a minimum buy in of $100,000 but you can fully expect a number of the players to take more to their seat.

The reason I am flying to Vegas is that I am going to be on ‘Poker After Dark’. This will be my first televised poker appearance and I am very excited. Lana (CardRunners Marketing Director) worked very hard to get me on the show and called me Friday afternoon to let me know about it. It totally caught me off-guard, especially since I have a big assignment due Tuesday for my architecture class, bit I quickly decided that I was in, got an extension on the assignment, and now here I am flying cross-country.

With Ivey, Hastings and Dwan already confirmed as attending the match up, we thought that we would also tell you about the other players that Brian will be up against, putting his tutorials into action.

Patrik Antonius, Brandon Adams and Jared ‘harrington25’ Bleznick will complete the line up and as you can see there are some huge names in the running, so the match should be great for both spectators to get their claws into as well as a great learning experience for an excited Hastings.

Finishing his blog post, Hastings revealed that although he will begin taping the match up on Monday, he has been told that he will not be allowed to discuss a number of issues regarding the match up but also said that once he knows what he can and can’t tell people, he will explain a little more about the game.

The upcoming ‘Poker After Dark’ will be a completely new experience for both the regular faces who participate in the games as well as those who help to run the high stakes cash game, because this will be the first time that the game has not been No Limit Texas Hold’em Poker, instead the organisers opted to make the change to fall in line with the increasing popularity of the Pot Limit Omaha variant over recent years.

Hastings’ appearance is thought to be going on air in 2011 but so far we have not been told a set date but we are sure that once Brian finds out, he will be the first to tell us.

Until then the pro’s will be continuing to battle it out on Full Tilt Poker which is the best poker site for high-stakes cash-games!