Brian Hastings has earned a WSOP bracelet after taking down event #12 at the 43rd staging of the festival in Las Vegas. 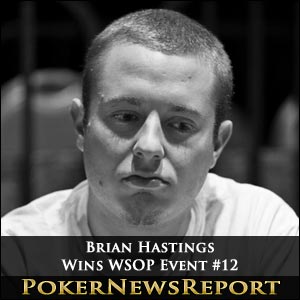 Young Pennsylvania pro Brian Hastings has earned a World Series of Poker (WSOP) bracelet after taking down event #12 at the 43rd staging of the festival in Las Vegas.

The 23-year-old might have pocketed $371,498 for outlasting 151 other players to win the $10,000 buy-in Heads-Up No-Limit Hold’em tournament, but – while happy to enjoy a good pay day – Hastings was only really interested in collecting that prizes piece of jewellery.

The online pro – who left the USA to set up camp in Canadian city Vancouver after Black Friday hit internet play heavily in the States – said:

I’ve had much bigger scores than this online. But there’s only one gold bracelet and this means more than the money to me.

The former teacher started the final day of this event in the Brasilia Room of the Rio All-Suite Hotel & Casino just one win away from the final – and eager to snatch the gold bracelet away from semi-final rival Tommy Chen before taking on either Jason Mo or two-time WSOP champion Brock Parker in the climax to the tournament.

As it panned out, Day 3 could not have gone much better for high-stakes cash-game specialist Hastings as he defeated San Jose’s Chen and then St Louis’ Mo for the title without using either of his lammers.

The eventual champion blasted past Chen, taking his opponent’s first buy-in just minutes after the semi had started. Hastings had his rival’s second lammer soon after, although Chen did fight back for the chip lead with his final lammer.

But Hastings then doubled-up when his A♣ 6♦ held against the Q♦ 8♦ of Chen after the latter had moved all-in pre-flop. Hastings ended the tie minutes later with K♦ 10♥ against the 8♥ 8♣ Chen shoved all-in with pre-flop. The board came down Q♦ 5♣ 2♠ 10♣ 9♠ to give Hastings a pair of tens and the chance to secure a sought-after bracelet.

‘Bracelet Means More Than The Money’

The final against Mo – who had beaten Maryland’s Parker in the other last-four clash – was also pretty straightforward for Hastings. Mo fell behind almost immediately and quickly used one of his last two lammers, before cashing in the other soon after as his chip stack dwindled.

In what was a spookily similar match to his semi-final, Hastings briefly lost his chip lead before doubling through Mo when his A♣ 7♥ held against A♦ 3♦. It was all over on the next hand after Hastings, on the button, moved all-in with A♥ 4♥ and was called by big blind Mo, who showed Q♦ 9♠. The board came A♠ J♠ 8♣ Q♣ 7♣ to secure Hastings’ victory and fulfill his dream of bagging a bracelet.

Hastings reiterated his eagerness to collect the jewellery ahead of the cash, adding:

The bracelet means more than the money, honestly. I mean, the money’s great – especially when I’ve been on a downswing playing cash games out here.

However, the cash will also come in very handy for Hastings as he just recently bought a house in Fort Lauderdale, which he intends to use as an easy way to get to the Bahamas to continue playing online poker.

It appears Hastings – who picked up €54,810 for taking eighth place in the €10,400 buy-in No-Limit Hold’em (split format) event at last year’s WSOP Europe in Cannes – has no immediate plans to return to Canada to continue his online poker career, saying that his move to Florida will allow him to buy cheap, quick flights to the Bahamas, so I can see myself making some day trips and some week-long trips to play online.

That’s what money can do – give you the chance to live out your dreams. And that’s exactly what Hastings is doing right now. Good man.

Hastings’ path to glory began with a first-round bye to see him enter the round of 128, where he beat Tennessee’s James Rumptz, followed by a victory over New Jersey’s Emil Patel. That win not only guaranteed him of a place in the round of 32, but ensured him of his first WSOP cash in the USA.

Day 2 saw Hastings defeat three rivals, with Vegas-based Tommy Vedes the first to go when the former’s K♥ Q♦ held against K♣ 9♦. That victory set up a last-16 clash with another Vegas pro in Amritraj Singh for what turned out to be his longest game that day.

Hastings emerged victorious after he and Singh got all their chips in following a 10♥ 9♦ 5♦ flop. Hastings showed Q♦ 6♦ for a flush draw while the 10♦ 2♦ of Singh gave him a weaker flush draw as well as top pair. But no flush would win this hand as Hastings made trip sixes from the 6♥ turn and 6♠ river.

Now into the quarter-finals, Hastings’ final match of Day 2 paired him with Michigan’s Jeffrey Gross. Hastings certainly had to fight hard for victory in this match as he battled back from being 4-1 down in chips. The final hand, though, saw Gross commit with J♦ 10♣. Hastings called to show Q♠ Q♥ and stayed ahead to make the final four on a board that read A♦ A♥ 4♣ 4♦ 5♣.

Thereafter, Hastings went on to win the event outright on Day 3, saying:

It feels great. When I started getting into poker in 2003, I was part of the poker boom generation watching all the WSOPs on TV. Winning a bracelet was always a goal of mine.