Brett Angell has the chip lead at the final table of the UKIPT London Main Event after a day on which being ahead in a hand did not guarantee success. 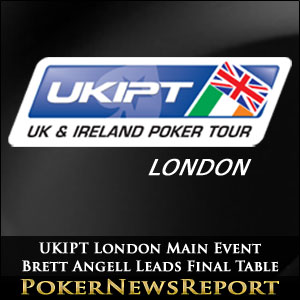 Brett Angell has the chip lead at the final table of the UKIPT London Main Event after a day on which being ahead in a hand did not guarantee success.

Irrespective of whether you believe in heavenly powers or not, the UKIPT London Main Event has seen more than its fair share of players against the odds. On the fringe of Friday´s bubble, Parker Talbot crippled Antonin Duda A♣ 9♣ > Q♥ Q♦ after the board had delivered an Eight-high straight and Marcelo Urbina escaped elimination when a 4% chance (A♥ 9♣ -v- K♦ 9♠ on a flop of K♣ K♥ 5♣) courtesy runner-runner clubs to complete a flush.

The fates continued to show little mercy on the penultimate day of the UKIPT London Main Event as fifty-one players returned to the Grand Connaught Rooms in London´s West End to play for a place at the final table and to have a stab at winning the £133,500 first prize.

Yesterday´s action followed a similar pattern with Lukas Peleckis busting Jason Barton A♦ J♠ > A♠ K♠, Vladimir Troyanovskiy taking an early chip lead with A♦ 10♦ > Tom Gallagher´s A♣ Q♥ and – in probably the most incredible hand of the day – Rasmus Agerskov cracking Nicholas Szeremeta´s pocket Aces with Quad Kings.

Keith Hawkins was bust in twenty-third place (A♣ Q♠ < Sandro Mescola´s A♠ J♠) when Mescola found the J♥ on the Turn, but the most pivotal hand of the day came during the fourth level of the day when Vladimir Troyanovskiy shoved all in with A♣ K♥ and Brett Angell made the call with A♦ K♣. Angell was the player at risk, but incredibly the board ran J♠ 2♦ 10♦ / 3♦ / 4♦ to propel him into the chip lead.

Bad Beats Continue into the Evening

Brett Angell´s lead at the top of the leaderboard was only temporary, as Vladimir Troyanovskiy enjoyed his own slice of good fortune to eliminate Lukas Pelekis K♣ J♣ > J♦ 5♠. Pelekis had paired his Five on the flop, but Troyanovskiy hit a runner-runner King-high straight to leap-frog Angell back in to the chip lead.

Troyanovskiy then powered into a commanding chip lead – flopping a set of Threes on a Six-high board to best UKIPT Marbella Champion Ludovic Geilich´s pocket Eights, and eliminating Otto Richard A♥ J♦ > pocket Deuces when the board delivered two pairs and Troyanovskiy´s higher kicker counterfeited Richard´s pocket Pair.

As the field was reduced to sixteen players, the final table of the UKIPT London Main Event began to take shape. Rasmus Agerskov spiked a King on the River to bust Day 1A chip leader Garrett Levrini A♣ K♦ > 10♥ 10♦, Nickolas Davies eliminated Ignacio Palau in a standard A♦ Q♠ > A♠ 7♦ confrontation – and then took the chip lead in a Q♦ Q♥ > A♣ K♥ encounter against Vladimir Troyanovskiy.

Looking Ahead to the UKIPT London Final Table