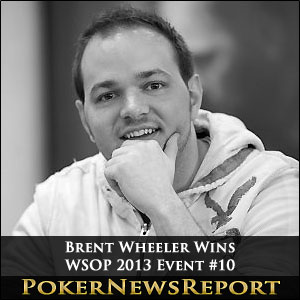 Limit Hold’em is perhaps not as popular as its more exciting No Limit counterpart, but that didn’t stop 645 hopefuls from forking over $1,500 to play in Event #10 of this year’s WSOP. When the smoke finally cleared, it was former caddie Brent Wheeler standing head and shoulders above the competition.

It was the 27-year-old’s first win and his third final table appearance at the WSOP. Remarkably, his two other final table appearances were both in similar events, taking place over a four-day span in 2012. With his victory on Thursday, it appears that for young Wheeler, the third time truly is the charm. The $191k score was Brent’s biggest to date, eclipsing the $119k he won at the 2010 EPT and the nearly $49k he received for finishing 4th in last year’s $2,500 Limit Hold’em (6-handed) WSOP Event #40.

But Brent’s victory did not come easy as he found himself locked in a tense heads-up battle with Canadian player Mark Mierkalns for over three hours. In fact, it wasn’t until the 241st hand of the final table that Wheeler was able to put away his feisty opponent. In that hand Wheeler raised from the button with Ace-3 off-suit, and Mierkalns, as he had been doing frequently during the match, three-bet. The flop of 9-9-3 with two diamonds appeared dry enough for the Canadian to continue. Wheeler raised, and surprisingly Mierkalns three-bet. Sensing larceny, Wheeler four-bet, and Mierkalns pushed. When the cards were flipped over it was Wheeler’s two-pair that was ahead of Mierkalns A-10 high. The turn and river bricked and Wheeler was declared the champion.

Even though the final table was littered with pros, the only person Wheeler feared going heads-up against was the hyper-aggressive Mierkalns. However, by carefully picking his spots, Wheeler was able to disrupt the Canadian’s rhythm.

Female poker player Malissa Zapata finished the event in third place, which was good for almost $77k. Her high finish marked the second time that a woman has made a deep run in this year’s WSOP. Two-time bracelet winner Eric Froehlich started the final table in good chip position, but a run of bad cards ended his day early, as he finished 9th.

Before turning pro, Wheeler was a promising golf player. He discovered online while still a student at the University of Illinois. Seeing poker as a viable way to earn a living, he became a mid and high stakes online pro, and after “Black Friday” relocated to Las Vegas, where he currently resides. When asked about how it feels to win a bracelet, he replied, It’s awesome. This is the moment you play for.