A Michigan ICU nurse was able to defeat a record-breaking field to win the Main Event of the WPT Seminole Hard Rock Poker Showdown. 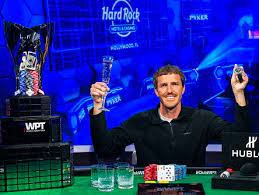 The World Poker Tour (WPT) is a top tour that offers plenty of poker action, but on and off the felt. Players can find WPT events online as well as around the world. For the past few days, the WPT has been in Florida hosting a series at the Seminole Hard Rock Casino. The Poker Showdown Main Event decided the final table at the casino late April and saw the largest turnout in the history of the series.

The event had 2,482 players competing which created a prize pool of more than $7.9 million. The buy-in for the event was $3,500. In the end, it was an ICU nurse who landed the first-place finish. Brek Schutten outlasted the large field to take home a prize of over $1.2 million.

Schutten is from Grand Rapids, Michigan and is a father of four who likes to play poker. He has been at the forefront of the COVID-19 pandemic and seen firsthand how families are affected both financially and physically.

In his work, Schutten has helped many people and put time in at the hospital during the pandemic. He decided to go to Florida once things opened up and one thing he decided to do was play poker. He says the win was an amazing feeling and he is happy about the win.

The turnout of the event was massive and goes to show how much live poker has been missed over the past few months. The turnout beat the previous largest event by quite a bit, as it was recorded with 1,795 entries.

With so many players competing, the prize pool reached massive potential. The top six players in the event were guaranteed to take home over $250,000. The final table was televised and took place at the PokerGO studio in Las Vegas, Nevada.

Once all the players were eliminated but two, the final heads-up round would take place. Schutten was taking on Steven Snyder for the title. When heads-up began, Schutten had a chip lead with 61.8 million to Snyder’s 37.5 million.

It would take 35 hands before the final hand would go down. The entire time, Schutten held the chip lead. On the last hand, Schutten decided to raise to 2.5 million on the button. He held 8-5 off-suit. Snyder called from the big blind with A-2 of diamonds.

The flop fell 10-5-5 with two diamonds on the board. Snyder checked and Schutten decided to bet two million with trip 5s. Snyder then check-raised with 4.8 million and Schutten called. The 7 of hearts on the turn saw Snyder bet another 5.2 million. Schutten moved all-in at that point and Snyder called.

The trips were winning and the 2 of clubs on the river secured the hand and the win. Schutten took home the amazing first place prize of $1,261,095 while Snyder earned $899,295 for second-place. The event was certainly one to remember for Schutten with the win and the WPT as they hit the record-breaking entry numbers!