The High Court of Justice has ruled that Phil Ivey cheated when he won £7.7 million playing Punto Banco in London´s Crockfords Casino in August 2012. 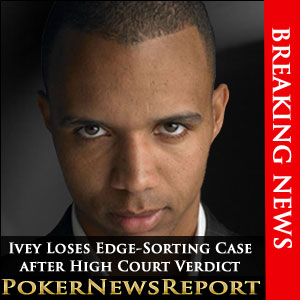 The High Court of Justice has ruled that Phil Ivey cheated when he won £7.7 million playing Punto Blanco in London´s Crockfords Casino in August 2012.

Phil Ivey will leave London this week £7.7 million poorer after Mr Justice Mitting ruled that the tactics he used while playing Punto Banco at Crockfords Casino in August 2012 gave him an advantage which the game precludes. The judge said that in his view this amounted to cheating, and he denied Ivey´s application to have the money that was withheld from him at the time returned.

Ivey has gone on record as saying Some believe I was cheating. I know I was not, and it is not yet known what his next course of action will be. Judge Mitting refused Ivey´s barristers leave to appeal the verdict, although it could be possible that Ivey´s legal team will make a direct approach to the Court of Appeal in London within the next few days.

Casino Claims it was “Stitched Up”

The actual events that took place in August 2012 were astonishing, and many observers believe that Phil Ivey should be entitled to his winning due to Crockfords´ gross incompetence. Such was their delight at having a high-roller attend the casino that Crockfords laid on a private jet for Ivey, put him and a friend – Cheung Yin Sun – in a private room, allowed him to wear a lucky hat and use a lucky pack of cards.

Although the cards belonged to Crockfords, Ivey had identified a flaw in them. Continuing his guise of being superstitious, he requested that all “bad” cards with a face value of eight, nine or ten were turned around in the shoe – giving him an insight into the value of the next card to be dealt and thus giving him an advantage over the house.

Staff and management at the casino agreed to Ivey´s request – believing it was just another superstition – and the casino´s security failed to spot the flaw in the cards. Management also failed to change the cards or put extra security on the dealing machine when Ivey started winning; but when his “hot run” finished and Ivey was £7.7 million in profit, the ruse became clear and the casino claimed it was stitched up and refused to pay up – refunding Ivey just his £1 million stake.

It´s My Job to Exploit Weaknesses in the House

Ivey sued Crockfords for the £7.7 million that the casino withheld and the case was heard at the High Court of Justice in London before Mr Justice Mitting. During the hearing Phil Ivey gave evidence that he viewed the casino as his opponent and said

It´s my job to exploit weaknesses in the house and try to give myself the best opportunity to win.

Despite Judge Mitting commenting that Ivey was a truthful witness, he still found in favour of Crockfords Casino – giving the casino the right to retain the money that Ivey had won for them. In a post-verdict interview, a representative of Phil Ivey made the following comment on the poker star´s behalf:

I am obviously disappointed with this judge’s decision. As I said in court, it is not my nature to cheat and I would never do anything to risk my reputation. I am pleased that the judge acknowledged in court that I was a truthful witness.

A representative of Crockfords Casino also issued a statement in which he said the ruling vindicates the course of action that Crockfords had taken after Phil Ivey´s edge-sorting ploy had been discovered and that the casino´s reputation for fair, honest and professional conduct had been kept intact.