Brandon Shack-Harris Moves Back to Top of WSOP POY

A sixth-place finish in Event #4 of the WSOP Asia-Pacific Series earned Brandon Shack-Harris enough points to move back to the top of the WSOP POY leaderboard. 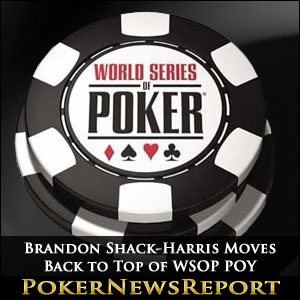 A sixth-place finish in Event #4 of the WSOP Asia-Pacific Series earned Brandon Shack-Harris enough points to move back to the top of the WSOP POY leaderboard.

The WSOP Asia-Pacific has been a fairly subdued affair to date, with the number of players way down on last year´s attendance – raising the question of whether the World Series of Poker Asia-Pacific should have been scheduled against the EPT London – or whether it should have been be staged in Australia at all.

The presence of legends such as Daniel Negreanu and Phil Hellmuth has done little to inspire Australians to the Crown Casino in Melbourne – many of whom consider the Aussie Millions to be the primary live poker event in Australia – and the highlight of the action to date has been Australian Jeff Lisandro winning his sixth WSOP bracelet in Event #3.

However, the race to be World Series of Poker Player of the Year has just been ignited, with Brandon Shack-Harris´ sixth-place finish in Event #4 giving him the points to leap-frog over former leader George Danzer – who had gone to the top of the leaderboard after a twenty-second place finish in the opening WSOP APAC event.

The Race to be WSOP Player of the Year

Coming into the WSOP APAC Series, little separated Brandon Shack-Harris and George Danzer at the top of the Player of the Year leaderboard after both players had enjoyed a sensational summer in Las Vegas. Brandon Shack-Harris may have only have won one event at the WSOP compared to George Danzer´s two bracelets within eleven days , but three further final table appearances (including the Poker Players Championship) enabled Shack-Harris to take a 5.80 points advantage to Australia.

The result of Event #1 gave George Danzer the narrowest of leads at the top of the POY leaderboard, but Brandon Shack-Harris´ fifth final table appearance this year in a WSOP event (in Event #4) gave him the points he needed to regain top spot by 44.50 points, and he now becomes a strong favourite to win the title with just five events remaining (neither player cashed in Event #5).

Is the WSOP POY now a Two-Player Race?

Despite Brandon Shack-Harris and George Danzer being the only two players among the top ten to have earned POY points at the WSOP APAC Series to date, the race to be Player of the Year is far from over. Daniel Negreanu and Phil Hellmuth are among the chip leaders in Event #6 – The Dealers Choice 8 Game Mix – and victory for anybody in the WSOP APAC Main Event could be worth as many as 427.50 points.

There could even be a last-to-first shock if Bruno Politano enjoys a good run in any of the remaining WSOP APAC events. Politano is one of the November Nine who will contest the climax of the WSOP Main Event in just five weeks time, and he scored his first POY points in the same Event #4 that took Brandon Shack-Harris back to the top of the leaderboard.

Regardless of who eventually wins the WSOP Player of the Year contest, at least the Shack-Harris/Danzer battle has sparked some life into what has otherwise been a pretty disappointing week for the World Series of Poker.