Brandon Schaefer Ends On a High After Event #14 Triumph

Brandon Schaefer took down the No-Limit Hold’em Shootout event #14 over the weekend for $311,174 after besting a 1,138-player field at the Rio’s Amazon Room. 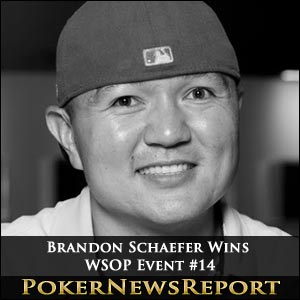 The Illinois player – who last September decided to join the US Army – eventually defeated California’s Jonathan Cohen in their heads-up clash that left the second placed player with $192,559 as a consolation.

Now, however, 31-year-old Schaefer will be leaving poker behind as he begins training to become a helicopter pilot on Friday of this week. Incredibly, Schaefer – who now lives in Seattle – had forgotten about this year’s WSOP, but then decided to jump on a plane to take part in just one tournament, the No-Limit Hold’em Shootout. What a great decision.

Cohen got up out if his chair called all-in for 1.8 million to reveal Q♥ J♥ for top pair, while Schaefer showed 7♣ 8♠ for an open-ended straight draw. The 5♦ river completed Schaefer’s straight as half of the gathered railbirds erupted in joy.