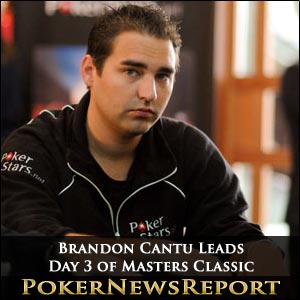 The Masters Classic of Poker is one of the most anticipated events on the Dutch live poker calendar, and the conflict with the WSOP Main Event Final Table, the conclusion of the Partouche Poker Tour and the GUKPT in Blackpool has not stopped a huge contingent of international poker players heading to the Holland Casino in Amsterdam for a week long poker festival.

A total of nine feature events take place during the course of the week, with the highlight being the €5,250 MCOP Main Event.

294 players entered this year´s Main Event and, with two days played, forty remain in the tournament. The chip leader is dual WSOP bracelet winner Brandon “The Bounty Hunter” Cantu, who takes a substantial chip lead into the penultimate day having twice come from behind to capture substantial pots.  Canto´s first casualty was Dutch poker legend Noah Boeken, who got all-in with his pocket Aces against Canto´s pocket Kings. A King on the turn sent Boeken to the rail and started Canto´s journey up the leaderboard.

The major casualty of Cantu´s good fortune was UK poker player Paul Alterman who shoved his substantial stack of 220,000 chips into the middle of the table following the flop of 8♣ 3♥ 2♠. Cantu called and tabled K♣ 6♣ for a flush draw against Alterman´s A♠ 8♥ and top pair top kicker. The 5♠ on the turn bricked for Cantu, but the 4♣ on the river gave him the pot and an overnight chip stack of 666,400 – almost three times the average and just short of 200,000 chips ahead of second placed Makarios Avramidis.

A Quality Field Lines Up Behind

This will still be no easy field to dominate for the American. Despite having lost stars such as Kevin MacPhee, girlfriend Liv Boeree, Patrik Antonius, Matthias de Meulder and Lex Veldhuis, still in with a chance of capturing the €382,200 first prize are 2011 WSOP bracelet winner Joe Ebanks, recent EPT Tallinn winner Ronnie Kaiser, EPT Copenhagen winner Anton Wigg and local hero Hugo Borst – who freerolled his place into the MCOP Main Event. UK poker players Keith Hawkins and Barny Boatman are also still among the leading players – with Boatman going for an astonishing fourth successive live cash in a major event.

Expect Day 3 of the Masters Classic of Poker Main Event to start quietly, as only 36 of the 40 remaining players will cash. Play should continue until a final table of eight is reached, and you can find out who those eight players will be tomorrow on Poker News Report.