Local part-time poker player Brad Albrinck won the first ever WSOP Circuit Main Event hosted at the Horseshoe Casino in Cincinnati for $221,994 and a WSOPC ring 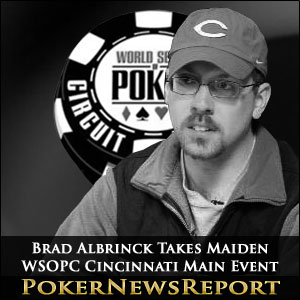 Local part-time poker player Brad Albrinck won the first ever WSOP Circuit Main Event hosted at the Horseshoe Casino in Cincinnati for $221,994 and a WSOPC ring

The WSOPC Cincinnati Main Event was the highlight of a twelve event series played at the Horseshoe Casino over the last week, and resulted in 740 players paying the $1,675 buy-in and creating a prize pool in excess of $1million.

After two Day 1s and a Day 2 on which players were allowed to re-enter, fifteen players managed to survive into the climax of the tournament. At the top of the chip counts, Greg Kolo had a substantial chip advantage after busting out James Frisby in the penultimate hand of Day 2 K♥ K♣ > J♣ J♦, but some notable players remained in the field including 2011 WSOP bracelet winner Aaron Steury and twice WSOPC ring winner Kevin McColgan.

Before the end of the level, Dae Kim (K♦ 9♣ < A♦ 8♥ of Chris Lillie), Chris Lillie (K♣ 9♣ < 9♠ 10♣ flopped straight of Josh Williams) and Chaz Deshayes (J♥ J♦ < A♣ A♥ of Josh Williams) had all joined the queue at the cashier´s desk and the final table of nine was set – Kevin McColgan now having taken the lead due a five-bet pre-flop dual with Greg Kolo which cost Kolo 522,000 chips, and Josh Williams chasing him up due to his dual knockouts.

Incredibly, it was chip leader who would be the next player to leave the tournament after losing a stack of chips to Josh Williams (A♦ J♥ > A♣ 5♠) and doubling up Viet Vo (K♣ K♠ > 9♣ 8♣). Still well stacked, McColgan (A♣ K♣) got involved in a pre-flop raising war with Brad Albrinck (K♥ K♦) and, when Albrinck shoved all-in, McColgan made the call. McColgan had the chance of a gutshot draw after the flop of Q♠ 10♦ 5♥, but with neither a Jack nor an Ace being dealt on the Turn or River, he was bust from the WSOPC Cincinnati Main Event in ninth.

McColgan´s departure came two full levels after the final table had been set, and it was nearly another full level before the next player was to be eliminated – Rory Monahan moving all-in with A♦ K♣ against Ray Attiyah (6♣ 6♠) who caught a set of Sixes on the flop. However, Attiyah´s enhanced stack of chips collapsed almost immediately as he doubled up Viet Vo (5♦ 5♠ > A♥ 4♥) and then he lost the last of his chips to Greg Kolo (K♦ Q♥ > K♣ 2♣) to depart the tournament in seventh.

With blinds now having increased to 25,000/50,000 (ante 5,000), several players were finding themselves short-stacked. Brad Albrinck increased the lead he had established when eliminating Kevin McColgan by busting Aaron Steury in sixth (A♦ 7♥ > J♣ 8♥) and then took big pots from Viet Vo and David Kash to put more than 2 million chips between him and his closest pursuer Greg Kolo.

Heads-Up Over in a Few Hands

The flop of J♠ 9♦ 3♠ / 5♣ / {7♣ç did not provide much of a sweat for Brad Albrinck, and the engineer who lives within a couple of miles of the Horseshoe Casino became WSOPC Cincinnati Main Event champion – collecting a WSOPC Ring, $221,994 and a seat at the 2014 WSOP National Championship to be held in Atlantic City next May.