One of the highlights of the Irish poker scene – and former record holder for the largest live poker tournament outside of America – is moving to a new venue. 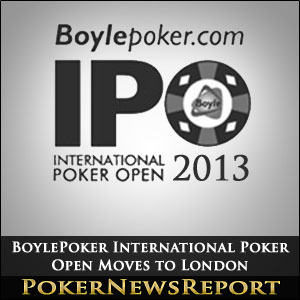 One of the highlights of the Irish poker scene – and former record holder for the largest live poker tournament outside of America – is moving to a new venue.

The BoylePoker International Poker Open will this year be hosted at Aspers Casino in the Olympic Park in London from Wednesday April 17th until Sunday April 21st. The £225.00 buy-in event – which last year attracted 1,148 players and was won by Englishman Tom Brady – will for the first time ever be a re-entry event; with players eliminated from the tournament on the Wednesday or Thursday having the option of re-entering the tournament on Friday.

According to the BoylePoker web site, the International Poker Open 2013 is being brought to London due to popular demand but, looking at the extensive schedule of online qualifiers, it is pretty obvious that the organisers are looking to increase the ratio of players who qualify through BoylePoker.com and possibly re-capture the record for the largest live poker tournament outside of the States (currently 1,625 and held by Dusk till Dawn/UKIPT Nottingham 2012).

We’re very proud to be hosting the hugely successful and popular International Poker Open overseas for the first time in April. Not only are we bringing an affordable, big field, internationally renowned poker event on tour to the English capital we will certainly be bringing the famous IPO atmosphere and craic as well. We can also guarantee the usual massive turnout, a juicy prize pool and, above all, a fantastic experience for every player who takes part.

Corbett announced that BoylePoker are adding £5,000 to the IPO 2013 prize money for players who qualify for the International Poker Open London 2013 through BoylePoker.com. The last 10 “men (or women) standing” who have qualified through the satellite schedule and earned 350 iPoints in two different months by playing poker on the site between now and April will have £500 added to their individual prizes. Late qualifiers are also eligible for the “Extra Cash” promotion if they earn 1,000 iPoints within a single month.

The satellite schedule makes it possible for players to freeroll themselves a seat to the International Poker Open in April. Each night at 7.00pm (GMT) on BoylePoker.com there is a freeroll turbo re-buy tournament which awards one seat into the IPO Feeder satellite for each £5.50 in the prize pool (the pool being comprised on re-buys and add-ons if required).

Further details and full terms and conditions can be found on BoylePoker.com.