Just two weeks after relaunching its online poker platform, Bovada Poker has announced it will run a $250,000 guaranteed tournament on Sunday 17th September. 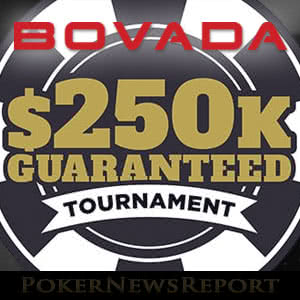 Just two weeks after relaunching its online poker platform, Bovada Poker has announced it will run a $250,000 guaranteed tournament on Sunday 17th September.

Online poker players based in the States can hardly complain they have been starved of tournament action recently. Although the conclusion of the Winning Poker Network´s OSS Cub3d series had to be [geolink href=”https://www.pokernewsreport.com/bigger-online-super-series-cancelled-due-to-ddos-attacks-21870″]cancelled due to DDoS attacks[/geolink], over the past few weeks thousands of players have competed in hundreds of events paying out millions of dollars.

A new OSS Cub3d series has been proposed from September 24th, but players in the States will not have to wait another two weeks before the next valuable tournament comes along. Yesterday Bovada Poker – who only relaunched its online poker platform a couple of weeks ago – announced it will run a $250,000 guaranteed tournament on Sunday 17th September at 5:00pm (ET).

$72,000 of Seats Available in Satellite Schedule

The buy-in for Bovada Poker´s $250K tournament is $325.00; and, conscious that a lot of players do not have the bankroll to support a buy-in of that magnitude, the site is hosting a comprehensive satellite schedule guaranteeing a minimum of 242 seats into the target event. The satellite schedule started on Tuesday with qualifiers having buy-ins of $7.70, $11.00, $22.00 and $44.00.

The more expensive qualifiers take place at various times of the day, with the $44.00 buy-in satellites having a unique guarantee structure. The first one to run on Tuesday guaranteed one seat into the target event. Last night´s satellite guaranteed two seats, and tonight´s satellite (at 9:00pm ET) guarantees three seats. Tomorrow (Friday) the guarantee increases to four seats.

The guaranteed number of seats in the $44.00 buy-in satellites continues to increase by one seat each night until Saturday 16th September, when there will be twelve seats up for grabs. Players who have not qualified by then for the target event have one last chance to satellite into the $250,000 guaranteed tournament on Sunday afternoon at 2:30pm (ET) when a turbo satellite guarantees twenty-five seats.

A Good Chance of an Overlay in the Event

Despite the generous satellite schedule – and the event being open to players at Ignition Poker and Bodog Poker – there is a good chance of an overlay. Bovada Poker will have to find nearly 600 players willing to buy-in directly to cover the guarantee, and it is unlikely many players from Brazil, Mexico and Canada will take part in the event as it coincides with more valuable tournaments in PokerStars´ WCOOP, Party Poker´s PowerFest and 888 Poker´s XL Eclipse series.

Therefore, if you are a States-based player and you would like to extract a little extra value from the event, we suggest you head over to Bovada Poker soon in order to take advantage of the low buy-in satellites currently underway. Undoubtedly, as the date of the $250,000 guaranteed tournament approaches, the satellites will become more populated and it will be harder to wins seats for the target event.

If you do not already have an account with Bovada Poker – and have never received a first deposit poker bonus from the site, the opportunity exists to extract even more value from the site via the Bovada Poker bonus. Details of the bonus, its unusual clearing structure and the other benefits of playing at the site can be found in our [geolink href=”https://www.pokernewsreport.com/bovada-poker”]Bovada Poker review[/geolink].