Bovada are offering the chance for poker players to potentially win several million dollars through their fantastic World Series of Poker (WSOP) 2012 promotion that will see the lucky few receive $12,000 packages to this summer’s festival. 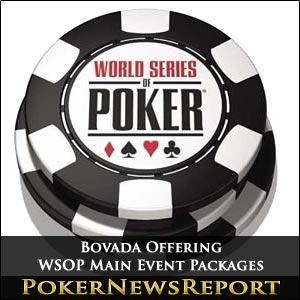 Bovada are offering the chance for poker players to potentially win several million dollars through their fantastic World Series of Poker (WSOP) 2012 promotion that will see the lucky few receive $12,000 packages to this summer’s festival.

WSOP qualifiers have been running every day of this month – before ending on Sunday, June 24 – with these satellites starting at just $1.10, although you can also take part in a Last Chance qualifier or even buy in directly for $500 to any of the weekly satellites to gain an even better chance of making the $10,000 buy-in World Championship that kicks off on Saturday, July 7, at the Rio All-Suite Hotel & Casino in Las Vegas.

As Bovada themselves state: Start your own story and win a seat to poker’s marquee event. Last year’s main event winner walked away with over $8.7 million in cash. You could be next.

Certainly, players in the USA could do with some good news after the frustrations of not being able to get their fix of online poker since the dark days of Black Friday last April 15, when the Department of Justice (DoJ) clamped down on poker websites due to allegations of illegal gambling, bank fraud and money laundering – and Bovada are most definitely providing that glimmer of hope with this latest promotion.

Just in case you don’t already know, the Bovada Poker Bonus will provide all new US customers with a 100% bonus of up to $1,000 if using our link to the poker room – and after you have made your first deposit.

But that’s not all as new players will also be handed tickets to take part in one of Bovada’s eight weekly $1,000 WSOP main event freerolls. So what’s holding you back from taking advantage of this wonderful offer? Nothing, I hope.

These satellites take place on all Saturdays between now and June 9 at 19:00 ET (Eastern Time Zone) with a $500 ticket to the main event qualifier being given to the winner of every freeroll.

If taking a shot at WSOP glory is on your mind, check out what Bovada are offering as their WSOP main event package:

Now, there are other ways to make Sin City this summer for the main event, with Bovada also providing players with the opportunity to score big through their sit-and-go tournaments.

If you place in these sit ’n’ gos, you’ll have the chance to play for a $1,000 heads-up prize, as well as $2,500 in the poker room’s weekly freerolls. To qualify, you’ll need to be paid from three SNGs within the space of seven days to get an entry into the weekly draw, while making the cash in four or more – again within a week – will ensure that you gain entry to one of their King of the Felt freerolls.

If you then manage to defeat the reigning King of the Felt, you’ll be handed a $1,000 prize and continue with the heads-up matches against challengers week on week. The longer you can stay as king, the better the prizes become – with 10 successive victories providing the champion with a seat at the WSOP main event. We at Poker News Report reckon this opportunity is not to be missed.

New customers should also note that they will be given six free chances at Bovada’s Sunday $100,000 Guaranteed event, while there are also Bad Beat and Royal Flush Bonuses, as well as entry into $15,000-worth of monthly freerolls, on offer.

Additionally, existing customers are not left out of the rewards schemes at Bovada, with Poker Points handed out as bonuses to their loyal customers, as well as the opportunity to make the WSOP main event through their King of the Felt promotion.

Just to clarify, there are four stages within the WSOP 2012 main event promotion that players can join at in an effort to secure their place among the poker elite in Vegas – and maybe meet up with other fellow Team Bovada players who have made the flagship event.