Bovada have released their betting odds for upcoming 43rd staging of the WSOP – with the poker room’s sportsbook department providing many interesting wagers. 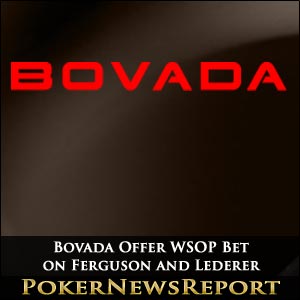 Bovada have released their betting odds for the upcoming 43rd staging of the World Series of Poker (WSOP) in Las Vegas – with the poker room’s sportsbook department providing many interesting wagers for those of us unable to make the trip to Nevada.

A total of 17 bets are available right now, from gambling on whether a woman will win an ‘open’ tournament at The Rio All-Suite & Casino to who will pocket the most cash throughout the whole festival.

However, the proposition most likely to gain the biggest column inches and media attention will almost certainly be the cheeky – some might say irreverent, although we can’t think who – bet on who between disgraced duo Chris ‘Jesus’ Ferguson and Howard Lederer will earn the most money at the WSOP!

We at Poker News Report (PNR) can’t imagine why either of the shamed Full Tilt Poker directors would appear in Sin City come next month, what with so many angry players out there.

As mentioned above, there are currently 17 bets available – only online, though – at Bovada.lv, including the +400 odds of Phil Hellmuth bagging a record-breaking 12th bracelet, as well as the attractively-priced +2,500 for a woman to emerge as the 2012 WSOP Player of the Year. Maybe Bodog Poker Pro Team members Tatjana Pasalic and Jennette ‘Jay’ Tan will be in contention.

While the Lederer – Ferguson bet might be the most controversial, you can get +300 on a man cashing in event #51, the three-day $1,000 buy-in No-Limit Hold’em Ladies’ Championship, that kicks off on Friday, June 19. No, really, you can.

Can a Man Win the Ladies’ Crown?

Will they be brave enough to post the buy-in this year? Let’s hope not as it does seem a very ungentlemanly thing to do. Take note, though, of those odds.

Another very significant wager being provided by Bovada.lv relates to the main event numbers in Vegas. Now, with last year showing 6,865 entrants, this bet offers -120 on there being both less than that mark as well as more.

There’s even a four-player bet available which matches Jason Mercier (+175) with fellow leading Global Poker Index (GPI) 300 pros Bertrand ‘ElkY’ Grospellier (+225), David ‘Doc’ Sands (+250) and Shawn Buchanan (+300) over who will pocket the most cash over the 61 events.

As you can see, there are more than a few interesting bets on offer at Bovada.lv – and what can compare with having a few bucks invested in the outcome of an event at the WSOP? Not a lot, unless you happen to actually be sitting round a table in the Amazon or Pavilion Rooms in the Rio while it’s all kicking off…

If you are considering opening a new account, then why not take full advantage of their huge welcome bonus, which provides all new US customers with a 100% first-deposit bonus of up to $1,000 when you go to Bovada Poker.

New players also get tickets to one of Bovada’s eight weekly $1,000 WSOP main event freerolls, so you might even have a say in the outcome of the poker room’s wagers. These satellites run every Saturday until June 9 at 19:00 ET (Eastern Time Zone), with a $500 main event qualifier ticket being handed to the winner of each freeroll.

However, there’s even more as new clients of Bovada will also receive six free shots at the poker room’s Sunday $100,000 Guaranteed tournament, while there are also Royal Flush and Bad Beat Bonuses, as well as tickets to $15,000-worth of monthly freerolls, being offered.