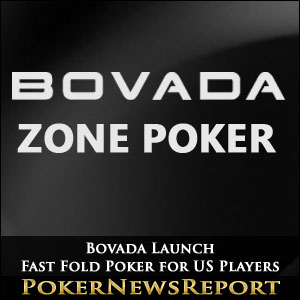 The introduction of the fast fold Zone Poker tables yesterday was a subdued affair, with a small red tab appearing among the options in the poker section of the Bovada Poker web site, and a small triangular “new” sticker placed in the cash game lobby of the Bovada Poker client – no fanfares, no press releases and no emails to players!

Nonetheless, word quickly spread throughout poker forums and social media, and both the NL Hold´em tables and those hosting Omaha Zone Poker quickly found some action – although a few players reported bugs which stopped them entering a table or system crashes once they were in the middle of a game (Players in the Big Blind are advised not to use the Check/Fold Now button in advance of the action coming to them).

Bovada´s Zone Poker is only currently available at stakes of $0.02/$0.05 and $0.05/$0.10, with a choice of 6-Max and full ring games available at NL Hold´em and 6-Max only for Omaha players. The game also differs from Rush Poker or Zoom Poker inasmuch as players can only have one entry per game – whereas the fast-fold games on PokerStars and Full Tilt Poker allow for up to four entries per player per game.

Plans to introduce Zone Poker at higher stake levels are being considered after the initial success of the launch at Bovada Poker, and Zone Poker tournaments are also scheduled for release in the near future. Players experiencing Zone Poker for the first time yesterday were fairly happy with the product – and many described it as a fishbowl due to the loose nature of the low stakes players in the game.

Only Site in the US to Offer Fast-Fold Poker

Bovada´s launch of fast-fold poker may have seemed a natural addition to its portfolio of games, but the site is likely to be the only US-friendly poker room that offers fast-fold poker for US players, as many other US-facing poker sites are unlikely to attract the traffic to support such games.

Traffic on Bovada´s Zone Poker tables peaked last night at ~120 players on the $0.02/$0.05 tables and ~85 on the $0.05/$0.10 tables. No doubt these figures will increase as the word spreads about Zone Poker and during the peak hours of Saturday and Sunday when more recreational players log into their accounts and discover the new game.

Play “The Fastest Cards on the Web” at Bovada Poker

Bovada may have missed an opportunity by limiting players to just one entry per game; however with such positive feedback coming from players on the site, it is likely that Zone Poker will grow and be expanded to take this into account in a future software release. For now, players are invited to Step Inside the Zone and play what is described by Bovada Poker as the fastest cards on the web.