With St. Patrick’s Day just around the corner, Bovada has geared its latest cash bonus promotion to include a trip to Dublin, Ireland worth $5,000. 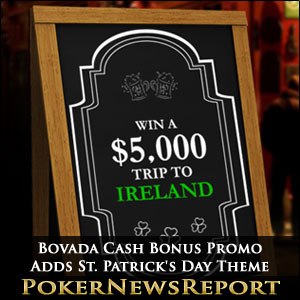 With St. Patrick’s Day just around the corner, Bovada has geared its latest cash bonus promotion to include a trip to Dublin, Ireland worth $5,000.

The promo kicked off yesterday, March 10, and runs through March 30. Bovada players need only collect 75 points during the course of any of three weeks to earn a $10 bonus and an entry to a drawing in which the grand prize is a vacation in Dublin priced at $5k.

Earning 150 points in a week will garner a $20 cash bonus and two entries to the trip to Ireland grand prize drawing. Accumulate 300 points and Bovada will credit your account with $30 and enter your name in the drawing three times. Each additional 50 Poker Points earned beyond 300 is good for another entry ticket.

So from now until the end of the month, a maximum $90 cash bonus is redeemable simply by playing online poker at Bovada. There is no maximum to the number of drawing entries you can earn as long as you keep racking up Poker Points during each of the three weeks of the promotion.

The player who wins the grand prize drawing has the option of enjoying a free trip to Dublin or instead choosing a $2,500 cash bonus credited to their account. The drawing will be held on March 31 and the lucky winner will have 48 hours in which to make a decision.

Bovada is the top online poker room that accepts players from the U.S., with more than four times the player traffic than any other U.S.-facing sites. Cashouts are quick and easy, typically delivered via cheque to player addresses within 7-10 days of submitting a withdrawal request.

Another added bonus is that players are allowed one free withdrawal per month. This is certainly not an industry standard, as most poker rooms throughout the world attach a processing fee to player cashout requests. While Bovada often runs cash bonus promos for its loyal players, the absence of a withdrawal fee is in itself a bonus that isn’t overlooked by savvy players.

Bovada also uses the anonymous player concept on its tables where player names are merely a seat number. Players are not targeted or bum-hunted, which allows the casual players who may still be learning the game to play without fear. Many online pros and grinders have moved onto other poker sites for this reason, permitting recreational players to enjoy softer games at Bovada.

Players who have not yet deposited at Bovada are eligible for a 100% up to $1,000 deposit bonus. A full sixty days is permitted in which to clear the bonus, adding a possible $1,000 to your account in addition to any money won at the poker tables.

Other bonuses that run everyday at Bovada include the Royal Flush and Bad Beat bonuses. Use both your hole cards to make a royal flush at a cash table and you will earn 50 times the big blind up to $200. Should you lose a hand at a ring game to four of a kind with a full house, aces over kings or better, a bonus 100 times the big blind up to $1,000 will be credited to your account.

There are reasons why more players choose Bovada than other [geolink href=”https://www.pokernewsreport.com/us-poker-sites”]U.S.-friendly poker rooms[/geolink]. Cash bonuses, grand prize drawings and awesome payout efficiency are among those reasons. You really can’t afford not to play online poker at Bovada.