Time is running out for players hoping to win Bovada Black Diamond Poker Open Championship Series main event as the tournament comes to a conclusion on Sunday. 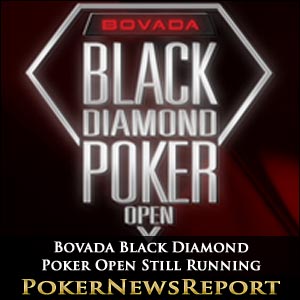 Time is running out for players hoping to become the very first winner of the Bovada Black Diamond Poker Open Championship Series main event as the tournament comes to a conclusion on Sunday.

After eight weeks of poker tournaments – from Texas Hold’em to Seven-Card Stud and Shootouts to Knockouts – the 52-event series reaches its climax at 16:00 EST (Eastern Time Zone) this weekend, when competitors will be playing to be crowned the inaugural main event champion.

Of course, there are also great prizes being offered for this $424+$25 buy-in tournament, with the Black Diamond Poker Open winner pocketing no less than $50,000 – and most likely more – as well as an engraved Championship Watch valued at $5,000 from the $250,000 guaranteed prize pool.

If truth be told, the main event is not actually the final tournament in the festival, as the $150+$12 buy-in Second Chance begins at 19:00 ET on Sunday to bring the series to a close. The guaranteed prize pool for this event is $25,000.

But don’t despair if you haven’t already booked your seat in the Championship main event – there is still time, even if you haven’t got 450 bucks handy as Bovada will be staging their final Super Saturday Satellite Day this weekend, when players can book their seats at a fraction of the price of the main event buy-in.

If you fancy a pop at the Black Diamond Poker Open main event title – as well as the cash and watch, of course – then check out the poker room’s satellite qualifiers by locating the ‘Special’ tab within the ‘Schedule Tournaments’ lobby.

Bovada customers also still have six more events available – with guaranteed prize pools ranging from $5,000 to $15,000 – to take part in before the weekend arrives, so it’s not all about the main event just yet.

All To Play For On Friday

As mentioned before, players should check out the Black Diamond Poker Open schedule for any additional information on events.