Philippe Boucher turned into a one-man demolition machine to bust everybody on his final table and claim victory in the WSOPE Pot Limit Omaha 6-Max. 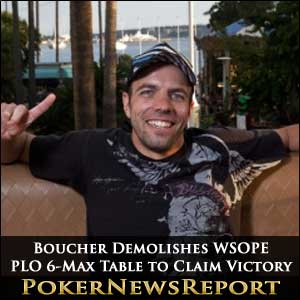 Philippe Boucher turned into a one-man demolition machine to bust every opponent on his final table within four hours and claim victory in the WSOPE Pot Limit Omaha 6-Max Championship.

The ex-ice hockey star hung up his boots just two years ago to semi-retire from the game (he currently manages Rimouski Oceanic in the Quebec Juniors League) and dedicate more time to poker, and his decision has paid off handsomely – collecting his first WSOP bracelet and a cheque for €124,584.

Boucher Storms Through the Field

Philippe Boucher had started the day in second position (behind Nicolas Fierro), courtesy of a flopped straight in the later stages of Saturday´s short-handed play which lead to the departure of John Nahum. He obviously developed a taste for eliminating other players, and within an hour had busted UK poker player Jack Ellwood and South African, Jared Solomon. With a stack of chips now double his closest opponent, Boucher was able to boss his three remaining opponents and, when they tried to stand up to him – they fell.

There was no happy ending for the player that had come into Day 2 with less than three big blinds remaining. Alexander Dovzhenko had enjoyed a superb run on Saturday to reach the final table, after many players would not have even bothered turning up to play the rest of their stack. Unfortunately his great comeback had to end somewhere, and calling Boucher´s shove (A♥ K♣ J♣ 7♠) with A♦ K♦ 10♦ 7♥ sealed his fate when the board fell 7♣ 5♣ 3♦ / Q♥ / 9♣ to give Boucher the club flush.

Fierro Two-Paired Out of It

Nicolas Fierro was Boucher´s next victim. The Chilean raised the pot on a flop of 2♠ 8♥ 10♦ holding K♦ K♠ 10♠ 8♣. Boucher got the Chilean all-in with Q♠ J♥ 10♣ 5♠ and was temporarily behind until the Q♣ gave Boucher a better two-pair than Fierro. The 3♥ was of no help to the Day 1 and Day 2 chip leader and he was sent to the rail in third place.

With four knockout blows already to his name, Philippe Boucher took a massive chip advantage into the heads-up against Portuguese player Michel Dattani, and within a few hands had extended that advantage into a 4:1 chip lead when catching Dattani trying to bluff a pot with a pair of Tens against Boucher´s Aces and Tens. Dattani took another blow in the next hand when pushing half his remaining chips into the middle with a pair of Sevens and was eventually knocked out in second place when Boucher rivered a straight to come from behind against the Portuguese player´s Aces.

Fast-Track to a Six Figure Payday

In a little under four hours, Philippe Boucher had demolished the aspirations of his opponents on the final table and won his first WSOP bracelet together with the winner´s cheque for €124,584. The French-Canadian was able to enjoy a good long rest before aiming to take on the world´s best players in the WSOPE Main Event, and for all the latest poker news about how he fared, make sure to visit Poker News Report throughout the next few days.