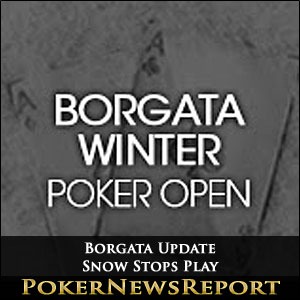 The 2014 Borgata Winter Poker Open Series has already endured more than its fair share of upset with the discovery of counterfeit chips in the opening event; but now more natural forces are preparing to add turmoil to the series as a massive snow storm heads towards Atlantic City.

Winter storm “Janus” has already been responsible for the cancellation of 2,700 flights in and out of New Jersey and, with the storm expected to drop as much as twelve inches of snow on Atlantic City, organisers at the Borgata Winter Poker Open have taken the precautionary measure of cancelling tonight´s scheduled $150,000 guaranteed Big Stack NL Hold´em Event #12.

With temperatures already down as low as -10ºF, and warnings being issued against travelers suffering from frostbite and hypothermia, Tournament Series Director Tab Duchateau advised players already in the Borgata Hotel Casino and Spa of the cancellation, and then asked for his followers to re-tweet the message on Twitter

According to NBC New York weather forecaster Janice Huff, the winter storm could last up until the weekend – which could affect the start of the $3 million guaranteed WPT Borgata Championship Event which is schedule to start on Sunday, certainly in terms of the numbers expected to take part if they are unable to travel to the venue.

Meanwhile, the cold temperatures in Atlantic City have not prevented the earlier scheduled tournaments from completing. Our update on Monday covered the results from over the weekend, and this is what happened since:

Event #7 was the $340.00 buy-in Seniors Event which attracted 271 players including 2002 WSOP Main Event winner Robert Varkonyi. Varkonyi failed to finish in the money, and the event was won by local recreational player Robert Gargel, who bust the final three players to collect the $22,080 first prize.

Event #8 is a four-day $250,000 guaranteed deeper stack event which is still ongoing.

Event #10 is a two-day event for which Day 2 is scheduled for tonight – subject to the weather. Nicolas Markatos leads the 35 players who made it through Day 1 of the $400.00 + $50.00 “Deepest” Stack NL Hold´em re-entry event, ahead of last year´s Winter Championship winner Andy Hwang.

Event #11 was the $400.00 + $50.00 PLO Event which saw the re-appearance of Fall Open PLO winner Anthony Caruso among the small field for the tournament. Caruso managed a fourth-place finish to add to his victory last November, with the event eventually being won by Michael Fiorito.

Event #12, as reported above, has been cancelled.