The number thirteen may be unlucky for some, but Perry Kaplan from Long Beach NJ certainly rode his luck well when winning Event #13 of the Borgata Poker Open 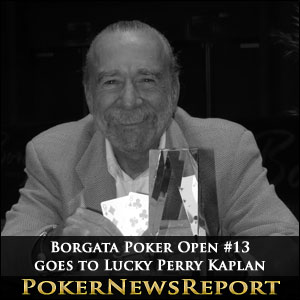 The number thirteen may be unlucky for some, but Perry Kaplan from Long Beach NJ certainly rode his luck well when winning Event #13 of the Borgata Poker Open.

The late finish was due to 953 players entering or re-entering Event #13 of the Borgata Poker Open – a series which is breaking attendance records daily – and the final table was not set until well after 3.00am, with the respective chips counts as follow:-

Short Stacks Tumble within One Level

With the tournament so far advanced, blinds were already at 60,000/120,000 (ante 10,000) when the ten players took their seats at the final table and, with more than half the table short-stacked, the initial action happened very quickly.

Chris Korres was the first player to depart, missing the board completely with K♦ 10♣ and falling to Baruch Thaler´s Q♣ Q♥. Thaler then chipped up into second place when he took out Laurence Hughes in ninth A♥ J♣ > 7♦ 6♠ and Perry Kaplan also improved his position by taking the last of Bill Miller´s chips A♥ 10♠ > 9♦ 9♣.

As the blinds rose to 80,000/160,000 (ante 20,000) three more players were dispatched to the rail. Frank DiRe was bust in seventh after attempting an outrageous bluff on a flop of 5♥ 5♦ 2♣ and being picked off by Baruch Thaler – who was sitting on pocket Deuces for a Full House.

Jan Nikitin had nursed his meagre stack pretty well, but chose the wrong moment to shove with K♠ Q♣ and failed to improve against the A♥ 9♥ of Robert Boyko to be eliminated in sixth, and Perry Kaplan (A♠ J♠) hit an Ace on the flop to best Jason Henrici´s pocket Fours and eliminate Henrici in fifth.

Going into four-handed play Lauren Kepple was still the chip leader, and she extended her lead with the eliminations of Robert Boyko and Baruch Thaler in fourth and third respectively to take an almost 4:1 chip advantage into the heads-up against Perry Kaplan.

Robert Boyko (K♥ 9♥) was hoping for a prayer to be answered when he called Lauren Kepple´s (A♣ K♦) shove from the big blind – but the flop of Q♣ 10♠ 6♠ would have given Kepple a better straight if a Jack had appeared, and the Nine he needed failed to show on the Turn or River.

Kaplan´s Lucks Gets to Kepple

Perry Kaplan said at the beginning of the heads-up that he wanted to get the climax of the Borgata poker Open Event #13 over and done with as quickly as possible, and shoved on the first hand with 5♠ 2♠. Kepple made the call with A♥ 3♥, but the flop of J♠ 6♣ 2♦ put Kaplan ahead. The 3♦ on Turn meant that Lauren Kepple was one card away from winning the tournament, but the 5♣ on the River gave Kaplan two unlikely pairs.

The pivotal hand of the heads-up came a couple of hands later, when Perry Kaplan shoved his pocket Sevens into Kepple´s A♠ 6♠. The flop and Turn of J♠ 9♣ 8♠ / 8♥ meant that Kepple would have won the tournament with any Spade, Ace, Jack or Nine, but she missed the lot on the 2♣ River, and the former chip leader was now down to her final 1.45 million chips.

Those chips went in when Kepple was dealt A♥ 2♥ and Kaplan made the call with 9♣ 8♦. Kepple was ahead through the flop of K♣ Q♠ 3♥ and the Turn of Q♦, but the 8♣ on the River paired Kaplan´s hand and prompted Kepple to announce “I’m so pissed. This is so sick,” as she stormed off to collect her second place winnings.