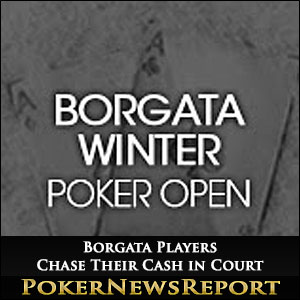 Players affected by the cancellation of the first event at the Borgata Winter Poker Open Series are taking legal action to recover their buy-ins and prize money.

Back in January, the first event of the Borgata Winter Poker Open was cancelled with twenty-seven players remaining when it was discovered that counterfeit chips had been introduced into the $1 million guaranteed tournament by Christian Lusardi during Day 1B.

Lusardi was subsequently arrested and the New Jersey Division of Gaming Enforcement started an investigation to see if Lusardi acted alone in his attempted fraud or whether he had accomplices. That investigation is still ongoing – leaving the players still left in the tournament wondering if they will ever finish the game or collect their share of the $1.4 million prize money presently being held in escrow.

Now, one of those twenty-seven players – Jacob Musterel – has launched a class action against the Borgata on behalf of the 4,284 players that entered the tournament, alleging that:

Musterel wants all the $560.00 buy-ins refunded to the players who took part in the opening event of the Winter Poker Open series, plus travel expenses, hotel bills and any other incidental costs. His class action includes all the players who took part in the event, irrespective of whether they were directly affected by Lusardi´s attempted fraud or knocked out of the tournament on Day 1A or Day 1C when the counterfeit chips were not in play.

Musterel´s Lawyer Says He Has a Strong Claim

In my 31 years in practice, I have to say this is one of the cleanest claims we’ve had.  Borgata holds itself as a respected provider of poker tournaments. They might say this is a learning experience for them, and while that’s laudable, it’s at the expense of the thousands who travelled to Atlantic City and entered this tournament under the expectation that it would be run properly.

Li Causi appealed for other players to join the class action, but his call seems to have fallen on deaf ears at the moment, with 2+2 forum contributor mrdadio48 (another of the final twenty-seven players) voicing a less-than-positive opinion of the legal action, and Nick Guagenti – who was second in chips going into the final day – tweeting

News of the class action lawsuit against Borgata has me uneasy Dont know what effects it will have Slower resolution 4 us 27 is my guess.

Officials at the Borgata Hotel, Casino and Spa have not commented on the legal action – instead referring enquiries to the New Jersey Division of Gaming Enforcement (DGE), who will only say that the investigation is ongoing. In truth, the Borgata´s hands are tied until the DGE conclude looking into the case to see if any other players were involved in the attempted fraud.

Whether or not Musterel´s class action is going to get off the ground is going to depend on how many players add their names to his cause. If only a handful of players choose to pursue the Borgata for the refund of their buy-ins and additional expenses, it is likely that the only winner will be Musterel´s lawyer. However, the fact that a class action has been filed might just speed up the resolution of the investigation for the twenty-seven players that remain in the tournament.

One Reply to “Borgata Players Chase Their Cash in Court”