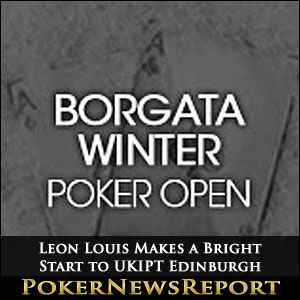 It was a long, long day for the twenty-seven players who remain in the opening event of the Borgata Winter Poker Open series – each of whom survived almost fifteen hours of action to carry forward dreams of a six-figure payday when the tournament is resolved tonight.

At the start of Day 2, 867 survivors from the three opening Day 1 flights took their seats at the Borgata Hotel Casino & Spa, eagerly awaiting the announcement of the size of the prize pool and how many players it would be shared between

Incredibly, the final entry total of 4,814 beat the previous record for an East Coast poker tournament (4,482 in Maksim Rozenfeld´s Borgata Summer Poker Open victory) and created a prize pool of $2,325,835 which would be divided between the top 450 players, with a min-cash worth $1,082 and the winner receiving $372,123.

A couple of notable stacks fell prior to the bubble being burst. Day 1A chip leader Torrey Korsog lost the last of his chips in a three-way pot in which he got all-in with K♥ Q♠ against two players with Q♥ Q♣ and J♣ J♠. The board ran Eight-high, and Korsog was eliminated.

We also lost the second placed player at the start of play – Hollywood actor James Woods – after he had been coolered by Tom McKeough 5♦ 5♠ > A♥ J♥ (Woods turned two pairs, but McKeough had flopped a set). Woods then got his remaining chips into the middle after his K♠ Q♠ had flopped two pair against Nick Guagenti (6♦ 6♣) who also had flopped a set.

The bubble burst within four hours when Bob Romanowski moved all-in for his last 95,000 chips with A♠ K♣ and received calls from players in the small blind (Q♥ Q♣) and the big blind (A♦ A♥) – both of whom had him covered. The K♦ on the Turn gave Romanowski hope of a miraculous recovery, but the 5♥ confirmed his departure from the Borgata Winter Poker Open Event #1 – to the delight of the remaining 450 players.

Lucky Long Knocks Chestnut From the Top of the Tree

Despite the fact that the remaining players were all in the money, many of them had entered multiple times and needed deep runs in the Borgata Winter Poker Open Event #1 in order to end the tournament in profit. Consequently there were a couple of hands in which players´ betting decisions could have been described as “questionable” at best.

Alex Ivan had already pulled off one miracle when his A♠ Q♣ had cracked an opponent´s Aces with a Turned straight, but he could not pull off a second escape act when bluffing all-in with 5♣ 2♣ against Coleem Chestnut´s K♠ K♥ on a club-free board. The elimination of Ivan saw Chestnut become the first player to exceed 2 million chips, and quickly build his stack to in excess of 3 million when his pocket Queen´s held against an opponent´s Ace-Five shove.

Elsewhere in the Borgata Casino, Kathleen Long was developing a big stack. Long had entered the day with a below-average stack, but had chipped up towards the million mark when a rivered straight bust an opponent´s pair of Deuces. She then benefitted from another late card when the K♥ on the Turn gave her two pairs to best Johnny Lam´s flopped top pair and took the chip lead after making an amazing call with Ace-high against Coleem Chestnut, who had tried to bluff Long out of a 5 million chip pot.

Incredibly, Coleem Chestnut saw his chip stack deteriorate from 6 million chips to nothing in the space of 30 minutes. After failing to bluff Kathleen Long out of the massive pot (above), he moved all-in for his last 3 million chips with A♦ 3♦ on the flop of J♣ 9♦ 10♦. Allard Broedelet made the call with 7♣ 8♣ for a flopped straight, and he managed to avoid a diamond on the Turn or River to bust Coleem Chestnut from the opening event of the Borgata Winter Poker Open.

Allard Broedelet then turned his attention to Kathleen Long, and took the chip lead when his K♠ Q♥ made a Full House on the Turn to best Long´s trip Queens. Long bust in the next hand against Walter “Heisenberg” White when her A♣ J♦ failed to improve past White´s A♦ Q♦, but White was also to leave the tournament before the end of the day – losing most of his chips to Joe Gola A♥ Q♣ > 10♦ 8♦ after both players had made a Full House on the board of Q♠ 3♠ Q♥ / 10♣ / 10♠.

Closely behind Allard Broedelet in the chip counts is Nick Guagenti; who recovered from being one of the shortest stacks in the room prior to busting James Woods (above), to finish the night with 9.7 million chips. Guagenti went on a heater in the last couple of levels; during which time he tripled up twice – the first time with A♥ K♥ > J♦ J♥ and Q♦ 4♦, and the second with A♥ A♣ > K♥ K♦ and A♠ K♠ – before being responsible for the dual eliminations of Steve Dannerman (A♥ 10♥) and Sangho Yi (3♥ 3♠) when his pocket Queen´s held on a King-high board.

Although Broedelet and Guagenti hold a significant lead over the remainder of the field, it would be no surprise to see one (or more) of the players among the top chip stacks emerging as a contender when the chips are in the air for the final day of the Borgata Winter Poker Open Event #1 later today, and readers can find out who eventually wins the event by following @PokerNewsReport on Twitter.