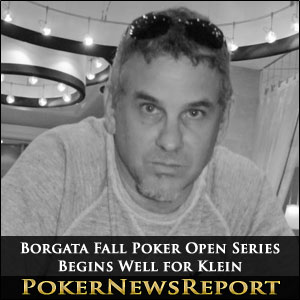 Klein had been chipping up throughout the day, but the hand which sealed the chip lead came in the last level when he flopped a spade flush with Q♠ 3♠. A fourth spade on the Turn raised fears that his opponent might be holding a better top card in spades, but at showdown the other player revealed the J♠ and Klein took down a 75,000 chip pot.

Event #1 of the Borgata Fall Poker Open Series may have four Day 1s (two of which are played on Thursday), but the conclusion of the event is played on a single Day 2 on Friday. Players can re-enter as many times as they wish and have the option of playing in all four opening days, even if they have survived one of them with a reasonable chip stack.

The “Twist” as it is known, is that players take their best stack into the conclusion of the tournament and forfeit any other chip stacks they have acquired. The likely outcome of this is that most of the players who make it into Day 2 will cash in the event. After yesterday´s action, 85 players remain from a total entry of 479 (including re-entries) of with an average stack size of 141,000 chips.

A Packed Two Weeks of Action

The Borgata Fall Poker Open continues until Wednesday 27 November and, in addition to the €1 million guaranteed opening event and Championship event, thirteen other “Main Events” are scheduled. The series includes Bounty events, a Senior´s event and Omaha events – but strangely no Ladies event.

Players who bust out early from any of the Main Events will be welcome to participate in any of the twenty-nine side events, or play at the famous Borgata cash game tables and attempt to win the Bad beat Jackpot which currently stands at $320,000 if a hand is lost with Quad Tens or better, or $50,000 if Quad Deuces to Quad Nines are beaten.

It will be an early start for players wishing to compete at the beginning of Day 1B of the Borgata Fall Poker Open, as the cards are in the air at 11.00am. Another sixteen levels will be played today, with blinds on Friday´s concluding day starting at 2,500/5,000 (ante 500).

Being overnight chip leader, Andrew Klein was rewarded with an entry into the $2,700 buy-in Championship Event (also guaranteed for $1 million) which starts on Sunday 24 November, but other players with big stacks will be aiming to chase him down when the Borgata Fall Poker Open Event #1 resumes on Friday.