Boobekov is no Booby on Day 1C of the APPT Snowfest

Australian Nurlan Boobekov led the field at the end of Day 1C in the APPT Snowfest, but with a smaller stack that any of the previous two Day 1 leaders. 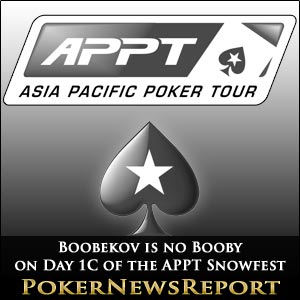 Australian Nurlan Boobekov led the field at the end of Day 1C in the APPT Snowfest, but with a smaller stack that any of the previous two Day 1 leaders.

Nurlan Boobekov took the honours on Day 1C of the PokerStars sponsored APPT Snowfest at the SkyCity Casino in Queenstown, but failed to make an impression on the combined leaderboard from the three Day 1s of the Main Event – his end-of-day stack of 69,200 chips only good enough for seventh place overall.

Just like Ken Demlakian, Nurlan Boobekov had remained anonymous and under the radar while the focus was directed at the household names of Australasian poker and Boobekov´s rise to the top of the leaderboard was courtesy of a hand well into the final level, when his ace-high hand was good enough to capture a 36,000 chip pot at the expense of previous leader John Shin.

Boobekov and Shin finished the day split by Gary Retallick – who recovered from being knocked off the top of the leaderboard earlier in the day – with Craig Blight, who had been giving PokerStars pro Bryan Huang a torrid time towards the end of play, and Aaron Benton – whose tripped set of fives in the penultimate level had knocked Yvo Molin from the top of the leaderboard – also prominent.

Other survivors on Day 1C included Alicia Sale – the “Queen of Queenstown” – who last year amassed 91,750 chips before busting out on Day 2 and then winning a turbo side event, and the Australian Hall of Famer – Leo Boxall – who only just survived the day courtesy of pocket Aces half an hour before the close of play. Around the same time, the second PokerStars Pro playing today Roy “GodlikeRoy” Bhasin had a less-than-divine experience and was dumped out of the tournament.

When play recommences at the SkyCity Casino in Queenstown on Friday, 87 survivors from the three Day 1s will play two levels in two flights (because the casino is not big enough to seat all 87), with those that survive each of the two-level flights combining for another two levels. Blinds will start at 300-600 with a 50 chip ante and those who will sleep best tonight include:-