The assistant US Attorney has indicated that he is pursing the extradition of four Bodog executives to answer charges of illegal gambling and money laundering. 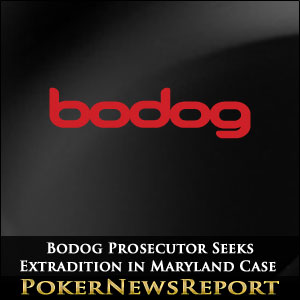 The assistant US Attorney has indicated that he is pursing the extradition of four Bodog executives to answer charges of illegal gambling and money laundering.

After a hiatus of two years, things seem to be moving in the case of United States of America -vs- Bodog Entertainment Group. Earlier this week assisted US Attorney Richard Kay docketed a letter to the judge presiding over the case – US District Judge Catherine Blake – stating that he intended to find a resolution to the case without the physical presence of those named in the indictment but in the meantime, I am pursuing extradition.

Those named in the indictment are Bodog founder Calvin Ayre, accountant James Philip, controller and e-commerce chief David Ferguson, and media buyer Derrick Maloney. The four executives are accused of running an illegal sports betting business between 2005 and 2012, and during that time conspiring to illegally launder over $100 million in payments for media resellers and advertisers and to pay gamblers in the United States who requested cashouts.

Bodog Dropped in it – but by Who?

The case against Bodog was being investigated in Maryland long before the US Department of Homeland Security seized the Bodog.com domain name and Bodog was rebranded in the US to Bovada. IRS Special Agent Randall Carrow opened an account with Bodog in February 2007 and subsequently requested a cashout of $1,500. When his check bounced, and a new one was issued under a different bank, the agent started to build an audit trail which led back to the payment processors Zip Payments, Inc. and JBL Services, Inc.

The investigation led to the forfeiture of more than $24 million from numerous bank accounts and charges being brought against Edward Courdy (Zip Payments) and Michael Garone (JBL Services) for helping to promote an illegal gambling scheme. Courdy and Garone cooperated with the investigation into Bodog´s activities and the case against Courdy is yet to be heard (after five years), while Garone received a year´s probation in December 2010.

Some sources claim that a high-ranking employee within Bodog´s technical department assisted investigators with their probe into Bodog´s activities, and his (or her) identity has been withheld. If convicted of the charges brought against them, Ayre and his three colleagues could face jail terms of five years each for the illegal gambling charges and twenty years each for the conspiracy to money launder. However, as seen with the charges brought against former Full Tilt Poker executives, it is likely that the Assistant US Attorney will agree to a financial slap on the wrist.

Ayre & Co – Fugitives from the Law

Calvin Ayre has always insisted that he and his co-defendants did nothing wrong and refuses to answer the charges in Maryland. He said that the indictment against his company and its executives is an abuse of the US criminal justice system and claims that online gaming is legal under international law (Bodog was founded in Costa Rica in 1994 and operates under an Antiguan license).

In his letter to Judge Blake, Assistant US Attorney Richard Kay states that he believes the four defendants in the case are living in Canada and Antigua. He also acknowledged that the extradition process can take a number of years and suggests that the case is temporarily closed until there is need for further proceedings.

This is a case that could drag on and on for many more years yet, and will probably end up with a fine that will just about cover the costs of pursuing the action against Bodog and its executives. For further information about the charges brought against Calvin Ayre and his colleagues, the full text of United States of America -vs- Bodog Entertainment Group can be found on the Calvin Ayre website.