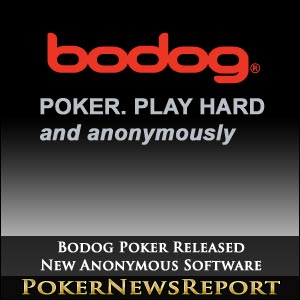 In a bold move catering to the recreational and casual poker players that the site aims to attract, the Bodog Poker Network has rolled out new software that removes players’ screen names from the poker tables of cash and tournament real money games, allowing players to play completely anonymously to avoid more experienced players from using poker-tracking software to gain an edge over casual players.

In a press release announcing the admittedly controversial move that will send shockwaves through the online poker playing community, [geolink href=”https://www.pokernewsreport.com/bodog-poker”]Bodog Poker[/geolink]’s new all-site anonymous tables are designed to stop poker pros accessing any data on how you play your game via the use of HUDs and other data mining sites like PokerTableRatings (PTR) and SharkScope.

With the new software, the screen names of players have been replaced with seat numbers and player images have also been deleted. In so doing, it is impossible to study hand histories and tendencies of other players because no players are named or identified.

We believe that introducing these features makes the Bodog Recreational Poker Model a pioneer in the online poker world and offers all players of all abilities the fairest place to play, Bodog Poker Network Vice President Jonas Odman said. We have shown before that we are not afraid of controversy by changing the way rakeback was viewed and starting to block data mining sites earlier this year and these new features now give players a less biased ‘pure poker’ experience. To my mind, the software and Bodog’s Recreational Poker Model is a genuine game changer.

Other poker sites have flirted with various forms of player anonymity. PartyPoker permits regular changes to screen names and has offered optional anonymous poker tables for heads-up action. The Microgaming Poker Network has featured similar anonymity on heads-up tables for a year or so and is making plans to increase its anonymous table offerings. Cake Poker has long touted its players’ option to change their screen names and had banned the usage of all HUDs, until recently.

However, this marks the very first time a major poker network has made the ground-breaking decision to remove all player screen names of all games, cash and tournament. Bodog’s plan actually began in September when the site removed full tables from its lobby to prevent data mining sites such as PTR to obtain player information, thereby confounding professional players who use that information to prey on weaker players.

The announcement and press release by Bodog received much criticism from players who are concerned about issues such as collusion and bots that might be more difficult to detect when a suspect player’s history cannot be tracked. A player named Tom posted the following on the Bodog site in reaction to the press release: Bodog is right, this is a game changer as in the worst idea/platform ever created in online poker, raising questions of the integrity of the games. How do I know I’m not playing against colluders who now could do that very easy? How do I know I’m not playing against bots by Bodog? Do I just take their word for it?

Odman responded to Tom’s concerns by saying, Even though we have launched Anonymous Tables, players are not anynomous to us, and we will keep monitoring the games for collusion and bots. We have even strengthened our tools in the back-end for that.

But Tom does have a point because most forms of online cheating such as player collusion, chip-dumping, bots and super-users who have gained the ability to see hole cards of other players are often discovered by players themselves. To simply rely on the actual poker sites to be fair, honest and operating with integrity in the best interest of players has historically been a terrible idea. One need look no further than Full Tilt Poker to realize that poker sites sometimes hide the truth.

The founder of Bodog Network, Calvin Ayre, had this to say about cheating and casual players, He [Odman} is overseeing a system that will be very very good an ensuring there are not bots or inappropriate collusion going on. Recreational players are not good at spotting this, so this is necessary no matter how the system is designed.

In addition to playing anonymously, Bodog has announced other features present in its new software designed to benefit the casual poker player. A more competitive rake structure, multi-tabling, improved site speed and accessibility, In-Client Blackjack, new formats in tournaments and a rabbit cam that allows players to see the cards that would’ve been dealt had the folded hand continued to the river.

In theory, the move to anonymous tables does sound like a good idea for recreational poker players. Only time will tell if it will prove to be a good move for the online poker industry as a whole.