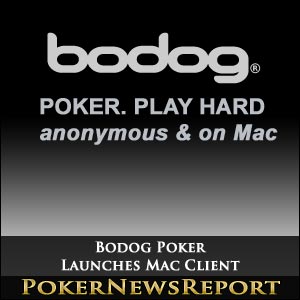 As part of the company´s strategy to give it´s poker site a broader appeal, Bodog has now launched a poker client that can be used on the Mac operating system.

System requirements for the new software are much more stringent than were previously required for players accessing the Windows version of the Bodog Poker software via “Boot Camp”, but Bodog Poker representatives have stated that most computers purchased within the last five years should have sufficient resources.

The launch was announced by Jonas Odman, the Network CEO, who stated The Mac client was always a ‘must have’ offering but to have it up within the first year of the software going live puts us well ahead of where we hoped we would be in terms of player reach at this stage. Now that the Mac client is ready we can concentrate on the first B2C marketing push of the Recreational Poker Model.

Bodog offers recreational poker players anonymous tables, the ability to play four cash tables or twenty tournament tables at the same time and a first deposit sign-up 100% match bonus of up to $1,000. Last month, Bodog Poker paid out over $2.5 million in their frequently under-subscribed guaranteed tournaments and are currently hosting a promotion which offers players the opportunity to win a $6,000 package to the Punta Cana Poker Classic in October.[isGeoAllowed] Our [geolink href=”https://www.pokernewsreport.com/bodog-poker”]review of Bodog Poker[/geolink] will be updated shortly.[/isGeoAllowed]