Bodog Poker’s launch of anonymous poker deserves to be given kudos for attempting to protect recreational players and forging a new path in online poker. 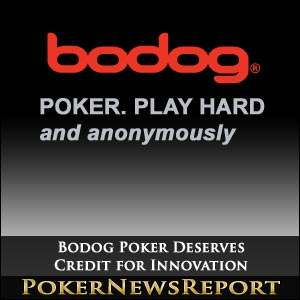 The Bodog Poker Network’s controversial launch of anonymous poker tables to prohibit sharks from using tracking software to outwit the more casual players deserves to be given kudos for attempting to protect recreational players and forging a new path in the online poker industry.

The poker players who are complaining on poker forums and threads are the very players that Bodog is attempting to dissuade from getting an advantage over the recreational poker players who don’t use the software available to study and track opponents.

“The sharper players definitely are not going to like a system that levels the field and give these recreational players more value,” Bodog founder Calvin Ayre posted in response to a player’s post. “Thats the only real issue here, everything else is just window dressing.”

Some players are angry that the anonymous format at Bodog Poker will allow players to cheat through collusion and using poker bots and these instances of unethical play could be harder to spot when all players are anonymous and are identified only by a seat or player number.

Ayre responded to this concern by saying, “I don’t think this is the issue since the recreational players this system is targeted at don’t think like this [about cheating] and the sharps are not really even wanted so they can just go play somewhere else, can they not?”

A very interesting answer and one in which it is apparent that Bodog has thought long and hard about the players it wants at their poker site. Upon establishing the new Bodog Poker software, Bodog knew that many poker players would be turned off and would eventually go play poker (and use their tracking software) elsewhere. But that, in essence, is the whole point.

Bodog has been talking about the need to attract recreational players for a couple years and other [geolink href=”https://www.pokernewsreport.com/online-poker-rooms”]poker sites[/geolink] have been saying the same thing, said Bodog Network Vice President Jonas Odman. But, Odman also noted that, “in reality not much has changed, poker sites still run rake races and other promotions clearly aimed at attracting winning players.”

So Bodog has taken the lead in an industry currently facing tremendous changes with proposed U.S. regulations for the game in the near future being debated in Congressional hearings and by lawmakers in individual states. Players are worried that their money may not be safe at current sites that are located offshore and unregulated. Bodog has made a move aimed at protecting players in an environment that presently cries out for consumer protection.

“The only way to grow poker is to attract more recreational players and to give them a good player experience,” Odman said. “That is what Bodog Recreation Poker Model is all about, and November’s software release was a big step in the right direction.”

On a personal note, the software does seem to be smoother and less clunky. I found it strange, though, playing without the ability to make notes and “size-up” my opponents by name. However, other players did not have the benefit of labeling my play either.

“Bodog spent a lot of time and money on this so they are not going to stop this until its run its course and their theories are proven or otherwise,” Ayre said. “I personally think this has the potential to be good for the entire industry, whether they can see it yet or not.”

Bodog Poker has been climbing up the rankings of player traffic among poker sites. This result is in no small part due to the Black Friday banishment of PokerStars, Full Tilt and Absolute Poker from the U.S. market. Currently ranked eleventh in the online poker industry averaging 1100 players during peak playing times, Bodog Poker is also the second largest [geolink href=”https://www.pokernewsreport.com/us-poker-sites”]poker site accepting U.S. players,[/geolink] trailing only the Merge Network.

But the funny thing is, Bodog doesn’t even seem to care where they place in the industry in comparison to other poker sites. Bodog Poker is clearly blazing their own trail in the online poker industry. The rest of us, poker players and poker site operators alike, can either jump on board or get out of the way.