Calvin Ayre has stated that the legal action filed last week against Full Tilt Poker and its board members Chris Ferguson, Howard Lederer and Rafael Furst, would not have been avoided with better online poker regulations because of Full Tilt’s stupidity in running their business. 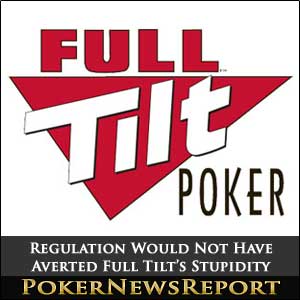 Calvin Ayre has stated that the legal action filed last week against Full Tilt Poker and its board members Chris Ferguson, Howard Lederer and Rafael Furst, would not have been avoided with better online poker regulations because of Full Tilt’s stupidity in running their business.

“The FTP board should all be fitted with extra large dunce caps,” Ayre said, for allowing players to deposit money on the site without Full Tilt having the means to withdraw the money from players’ bank accounts due to problems with their third-party payment processor.

Many industry observers believe that regulation of online poker will eventually come to fruition and that the allegations of fraud and money laundering against Full Tilt prove that regulations are sorely needed. But even though there are many Full Tilt poker players who are still waiting and hoping to see their bankrolls returned, there is still a debate as to whether or not regulation would be good for the online poker player.

“When regulation does finally come to the U.S. market, it will be needlessly strict, imposing onerous costs on operators that will ultimately be passed on to players,” Ayre believes.

The average player has to always pay some sort of cost just to deposit money in [geolink href=”https://www.pokernewsreport.com/online-poker-rooms”]online poker rooms[/geolink], whether its a credit card charge, bank wire transfer fee or fees imposed by companies such as Western Union or Moneybookers to send money. Add to that the fees associated with requesting a check withdrawal, bank wire transfer fees to receive a cashout, rake taken from each pot and then a tax that will surely be imposed by any federal regulations put in place by legalization and it gets harder and harder for a player to turn a profit.

There is no question that the online poker industry has been damaged by Full Tilt’s mismanagement and that the term “global Ponzi scheme” has made the financial world take notice of the fiasco, including observers who have never even played poker. Online poker is almost certain to be legal someday in U.S. markets, albeit heavily regulated. But, as Ayre pointed out, the problems won’t all be solved by regulation and online poker “will likely never return to its past glories.”

Calvin Ayre is founder of the Bodog brand and [geolink href=”https://www.pokernewsreport.com/bodog-poker”]Bodog Poker[/geolink]. You can read his full statement here.