It’s been about 1 1/2 years since Bodog Poker implemented its anonymous table format and the results have proven the concept to be quite successful. 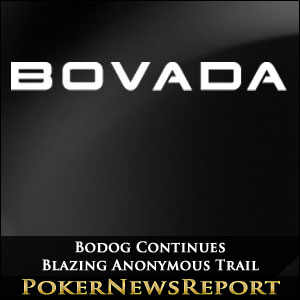 It’s been about 1 1/2 years since Bodog Poker implemented its anonymous table format and the results have proven the concept to be quite successful.

Originally despised and even ridiculed by many in the online poker industry, the Bodog/Bovada Recreational Poker Model removes player screen names and allows all players to compete completely anonymously, identifiable only by seat numbers. Its introduction in late 2011 was blasted by many online pros as an idea that would take the fun out of the game and never catch on. But the opposite has proven to be true.

Roughly 18 months later, Bodog/Bovada has taken over the top spot of [geolink href=”https://www.pokernewsreport.com/us-poker-sites”]poker rooms that still accept U.S. players[/geolink]. In an industry that now seems commited to attracting recreational players in order to maintain a healthy balance in the ecology of the poker room, the Bodog concept does exactly that.

Without being able to label players by name, the ability of sharp players to use poker-tracking software such as Hold’em Manager is gone. This has removed the edge that devoted players used to obtain by studying the hand histories of their opponents to determine various tendencies and playing styles. It has leveled the playing field and forced players to rely only on the current session being played to evaluate a player’s skill. Many proponents of fair play argue that this is the way the game should be played.

Also missing from Bodog is a player loyalty program that rewards players for climbing up a VIP ladder and earning additional cash and benefits. There are no Silver, Gold or Supernova levels that players can aspire to and gain significant cashback rewards. Bodog allows players to earn Player Points that can be used to gain free entries to various tournaments. That’s basically about it in the spectrum of rewarding loyal players.

Even recreational players would like to earn cashback rewards. That goes without saying. But the non-existence of a VIP program virtually assures that the pros and grinders who multi-table for hours on end in hopes of furthering their VIP status will not patronize Bodog/Bovada. And that’s precisely the point. To allow those types of players to play each other elsewhere and permit the casual players to gravitate to Bodog where they can’t be targeted and bum hunted.

Several poker rooms and networks have toyed with and instituted other ideas in which to protect recreational players. Skill segregation policies and separate tiers of players are some of the concepts being employed to achieve that aim. But, arguably, none is likely to make a recreational player feel as safe as he or she does playing completely anonymously from one session to the next as is done at Bodog/Bovada.

The anonymous table concept is slowly being followed by other poker rooms. The iPoker Network recently announced a move in that direction on several of its skins, with the entire network expected to eventually follow suit. Asaf Younger, the operations manager at iPoker, said that the concept has been embraced to allow players “to play freely” without worries of being targeted or tracked by sharks.

MPN and PartyPoker also host a select number of anonymous ring game tables. The way successful standards are copied within the online poker industry, it likely won’t be long before other skins and networks jump on the anonymous bandwagon.

When we first introduced the Recreational Poker Model, we were much ridiculed, said Jonas Odman, Bodog Poker Network President. It is satisfying that virtually all major poker rooms have now changed direction and are seeking to improve the poker eco-system by introducing incentives to the all-important net depositing player.

While the grinders and pros flock to PokerStars and other sites in hopes of making a big score through both online action on the virtual felt and player loyalty programs, many players who enjoy softer games are instead finding their way to Bodog/Bovada. For many, it’s a refreshing change to compete with players of the same caliber without wondering if your opponent is a shark who spends an unfathomable number of hours studying your play via Poker Tracker.

We believe the Bodog Network is far and away the fairest place to play poker online, Odman added. The rest of the industry is coming around to that line of thinking. Its just taking them a bit longer to catch up.