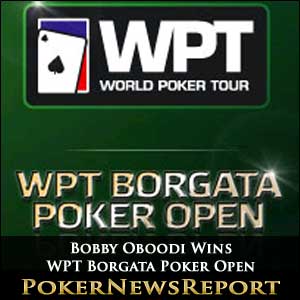 Bobby Oboodi – best known for taking down the PokerStars “Championship of Battleships Poker” and as a high stakes HU player on the online poker site formerly known as Full Tilt – has won the biggest cash of his career after taking down the WPT Borgata Poker Open in his home State of New Jersey.

Bobby, who plays online as “BigRedAK”, collected $922,441 after conquering the largest ever field assembled for the WPT Borgata Poker Open – an incredible 1,313.

Bobby Starts How He Means to Go On

At the start of the final day, six players were still in competition for the valuable first prize, entrance to the $25,000 WPT Champions Tournament and an instant lead in the WPT Player of the Year leaderboard. Bobby started in second place – slightly behind chip leader Fred Goldberg – but delivered notice of his intention when claiming the first hand of the day, and then eliminating Ricky Hale(A♣ 10♠) in sixth place when his A♥ K♥ paired with the K♠ on the turn to take the pot and chip lead.

The chip lead flopped back and forth throughout the early exchanges, with Goldberg forcing Bobby to fold in big pots on several occasions. However, Bobby broke clear of the remaining four players when taking Goldberg for massive 5.6 million chip pot with two pairs, and then extending his lead even further by eliminating Darren Elias in fifth when Bobby´s K♦ K♠ held against Elias´ J♦ J♥.

Jin Hwang, with five previous cashes in Borgata Open events, had started the day as the shortest stacked of the players but gradually managed to play his way into contention. His leap into second place came at the expense of Fred Goldberg when, with 3.1 million chips already in the pot, he bet a further 1,150,000 after the turn to force Goldberg to fold. Bobby Oboodi eliminated Goldberg soon after, and when Hwang´s A♥ K♥ hit a straight on the board against Daniel Buzgon´s 7♣ 7♠, the heads-up was set.

… and is Over in a Flash Flush

Hwang raised from the big blind to 1,750,000 and Bobby called. Both players checked the flop of 7♠ 6♠ 6♣ and then Bobby raised 1.6 million on the J♠ turn. Hwang considered his options and then said “Well, let’s gamble. I’m all in“. Bobby called and turned over Q♠ 2♠ for the flush. Hwang showed K♣ J♥ for two pair, and was eliminated in second place when the 3♠ was dealt on the river.

100 of the 1,313 players cashed out a minimum of $8,386 for their $3,500 buy-in. Among those who made a profit on the event were Vanessa Selbst, 2009 WPT Champion of Champions Yevegeniy “Jovial gent” Timoshenko and Will Failla, who was aiming for back-to-back victories in WPT events after his triumph in the WPT Legends of Poker event last month.