Bo “Box” Xie has the early lead in the Asia Pacific Poker Tour Main Event in Macau after spiking a runner-runner flush in one of the last hands of the night. 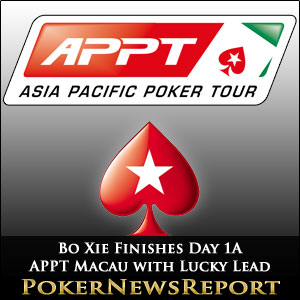 Bo “Box” Xie has the early lead in the Asia Pacific Poker Tour Main Event in Macau after spiking a runner-runner flush in one of the last hands of the night.

Day 1A of the HK$25,000 ($3,225) buy-in APPT Macau Main Event got underway yesterday – attracting 212 players to the PokerStars Live Poker Room in Macau´s City of Dreams – and, after 7½ hours of action, 87 players will carry forward chip stacks into Friday´s Day 2.

At the top of the chip counts is Chinese player Bo “Box” Xie, who had taken the chip lead with the elimination of PokerStars´ Team Pro Vivian Im in an Aces > Kings encounter, before extending his advantage with a runner-runner flush against an opponent who had flopped a Jack-high straight.

Tough Day for Many in Macau

Nobody expects the early stages of an APPT Main Event to be easy, but for many it was a particularly tough day. Minhui Lian (K♣ K♠) was crippled early on by Qifeng Duan (10♦ 10♣) when Duan made Quads to best Lian´s Full House (Kings over Tens), and Zhenjian Lin was eliminated despite flopping a set of Nines against Wei-Chuan Hsu (J♣ 9♦) and Yu Xia (A♠ A♦) when a Jack spiked on the River to give Hsu a Full House.

Top Australian player Ashley Warner (K♣ K♠) was sent to the rail by American Tyrone Kerrigan (A♣ K♥) when the A♥ spiked on the River, and it was also a tough day for 10-times WSOP bracelet winner Johnny Chan – who got seated ten minutes before the end of late registration and was out of his seat less than one level later, when his A♣ 3♣ missed its flush draw against Liu Xiao´s A♠ K♠.

Better than Average for a Few

Behind Xie on the APPT Macau Main Event leaderboard, Alvan Yifan Zheng had been chip leader for most of the day after chipping up quickly during the early levels of play, and their respective stacks of 166,000 chips and 151,400 chips are more than three times the average. Behind the two pace-setters, only four players bagged and tagged in excess of 100,000 chips – leaving the leaderboard looking a bit top-heavy.

Looking Ahead to Day 1B of the APPT Macau Main Event

Day 1B of the APPT Macau Main Event looks as if it is going to be just as tough as yesterday´s action. Among those expected to take their seats later today at the PokerStars Live Poker Room are PokerStars Team Pros Raymond Wu and Celina Lin, and organisers are anticipating that the second opening flight will attract in excess of 300 players. Those who can take a day off from the pressure include: