A Borgata poker player carrying $100,000 in cash escaped not once, but twice, from attempted robberies while waiting to board a plane out of Kennedy airport. 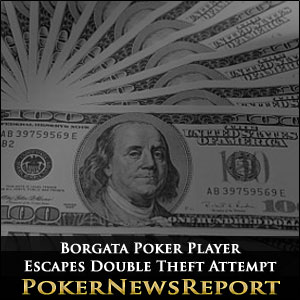 A Borgata poker player carrying $100,000 in cash escaped not once, but twice, from attempted robberies while waiting to board a plane out of Kennedy airport.

Eric Riley (32) from Deerfield Beach in Florida attended the Borgata Fall Poker Open last week, hoping to play up the $80,000 he won in the Isle Open in Pompano Beach he won in November. Despite failing to cash in the Borgata Fall Poker Open Championship Event, Riley managed to add $20,000 to his bankroll but, as was arriving at the Jet Blue terminal at Kennedy airport, the drama started.

Riley had accepted a lift to the airport from a character named “Junior” (you can read a warning about Junior on the 2+2 forum here) but, before Riley had a chance to retrieve his duffel bag containing $100,000 in notes from the trunk of the car, Junior drove off with the trunk still open.

Like a scene from a movie, Riley hailed a cab and instructed the driver to “follow that car”. The taxi driver caught up with Junior´s vehicle at a red light just before the JFK Expressway, at which point Riley jumped from the cab and snatched his duffel bag from the still-open trunk. Junior sped off and has not been seen again since.

Riley´s lucky escape #2 then came after a black Toyota Camry (the type of vehicle often used by the FBI) pulled up at the scene, and two men emerged, claiming to be undercover policemen who had just witnessed what had happened.

Relieved at the prospect of being in the “safe” custody of the law, Riley accepted a lift back to the airport (the cabbie got a generous tip!) and explained the full story of what had happened. Unfortunately the two men turned out not to be cops, and one of them pulled out a gun and demanded that Riley hand over his cash.

Riley refused and – like a scene from a movie – leapt from the moving vehicle clutching his duffel bag containing the money. Covered in cuts, and with his clothes shredded from rolling over on the highway, Riley hailed another cab, who took him to a legitimate cop – to whom Riley related his incredible story.

The Port Authority Police Department are now investigating the case and trying to establish whether “Junior” was in cahoots with the two fake undercover cops, or whether the two attempted robberies were just a coincidence and Riley was unlucky.

Eric Riley missed his flight back to Florida and was unable to spend Thanksgiving with his family. He also needed to do a little shopping; for although he had managed to retrieve his duffel bag containing the cash he had won at the Borgata, Junior had driven off with a suitcase full of Riley´s clothes.

To use another popular film quote You can´t win them all!.