From next Monday, players will have a special incentive to play 888Poker´s hyper-turbo BLAST game – the opportunity to share in a million dollar prize pool. 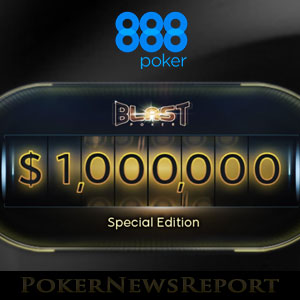 From next Monday, players will have a special incentive to play 888Poker´s hyper-turbo BLAST game – the opportunity to share in a million dollar prize pool.

BLAST is 888Poker´s equivalent of Spin & Go – a fast-paced, hyper-turbo Sit & Go game that has a random prize of up to 10,000 times the buy-in drawn once four players are seated at the table. [geolink href=”https://www.pokernewsreport.com/888poker-launches-blast-super-turbo-sit-go-games-20844″]Launched in July[/geolink], BLAST has a unique feature that sets it apart from other hyper-turbo Sit & Go games – the length of each game is determined by its value.

Depending on the value of the prize drawn, a game can last 3, 4, 5, or 6 two-minute levels. A countdown timer appears in the corner of the screen informing players how much longer the game is scheduled to last and, when the countdown timer reaches zero, all remaining players are all-in every hand. The countdown timer ensures that every game has an exciting conclusion.

The format of BLAST has been a massive success. Players were quick to flock to the tables after the first 10,000x Jackpot hit in August. Another Jackpot prize was won in September, followed by two more on the [geolink href=”https://www.pokernewsreport.com/two-blast-jackpots-hit-at-888poker-last-weekend-21027″]same weekend in November[/geolink]. Now – for a limited time only – 888Poker is giving players the opportunity to play in a Special Edition of its BLAST game with a potential Jackpot prize of $1,000,000.

How the BLAST Special Edition Works

If the million dollar jackpot prize is spun, the game will be scheduled for 6 two-minute levels before any remaining players are all-in every hand. As with all other Jackpot games, every player will win a prize – the prize distribution being as follows:

To accommodate the possibility of a million dollar prize pool, the frequency of some of the other prizes has been changed. The likelihood of a 10x, 100x or 1,000x prize pool multiplier being drawn has been reduced, and sharp-eyed players will also notice a slight increase in how much of the buy-in is assigned to the entry fee. Nonetheless, the BLAST Special Edition game offers a superb opportunity for players to win a major cash prize immediately after Christmas.

Although the BLAST Special Edition promotion does not get underway until Boxing Day, players unfamiliar with the format should head over to 888Poker today. There is a definite benefit to having some experience under your belt before playing for a life-changing amount – as the winner of 888Poker´s first Jackpot “Lepeno78” noted in an interview with the site´s online magazine.