With the WPT Borgata Championship just thirty spots from the money, Blake Bohn has a substantial chip lead over his 149 opponents at the end of Day 2. 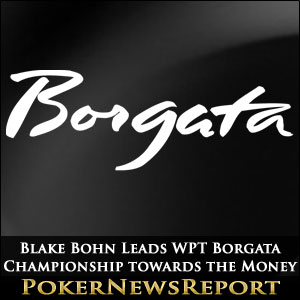 With the WPT Borgata Championship just thirty spots from the money, Blake Bohn has a substantial chip lead over his 149 opponents at the end of Day 2.

Due to the massive turnout for the WPT Borgata Championship there was an extra level tagged onto the end of Day 2 in order to reduce the field to a manageable number as the tournament reaches its concluding stages. The extra level had no impact on who the overnight chip leader would be at the end of Day 2, as Blake Bohn moved well ahead of the remainder of the field in the penultimate level of the night after busting out 2012 PCA Main Event Champion John Dibella.

The Fate of the Day 1 Chip Leaders

Going into Day 2, Day 1A chip leader Ben Bianco had a substantial chip lead over the 600 players who had survived the two opening flights. Bianco quickly chipped up to in excess of 600,000 chips during the first level of play – more than double his closest opponent at the time – but started to take some serious hits to his chip stack thereafter.

Bianco lost a big pot of 62,000 chips to Travell Thomas during Level 13 when Thomas paired his A♣ Q♣ on the flop and got three streets of value against Bianco. Bianco failed to recover from his big loss and closed the day with 191,000 chips – thirteen big blinds below the average chip count of 245,200 chips.

By comparison Day 1B chip leader Darlene Lee had a much more subdued day and chipped up quietly to bag and tag 440,000 chips and be in a good position to safely negotiate today´s money bubble. Other players who carried through top stacks from the two opening flights and who made it into Day 3 include Julio Marrero (457,500 chips) and Ray Shackelford (260,000 chips).

Also surviving Day 2 of the WPT Borgata Championship were last year´s WPT Player of the Year Mukul Pahuja, WSOP Main Event Champion Ryan Riess, and Barry Schulman – who recovered from having his Aces cracked by a flopped Flush, to finish the night with 217,000 chips after doubling up late in the added level A♥ 3♣ > Q♣ Q♥.

Those who were not so fortunate during Day 2 of the WPT Borgata Championship included Matt Waxman (bust A♠ K♣ > A♦ 5♣ by Justin Zaki) and Joe Kuether, who could not improve on his recent fifth place in the Seminole Hard Rock Poker Open when missing all his outs to be eliminated by Stewart Newman 9♦ 9♠ > A♥ 9♥.

Loni Harwood was eliminated when her pocket Aces were cracked by Wade Woelfel´s rivered flush, and Andy Philacheck was also unfortunate to be sent to the rail after flopping two pairs with A♣ 10♣, only for his opponent to have flopped a better two pairs with A♦ K♦.

Looking Ahead to Day 3 of the WPT Borgata Championship

When the 150 remaining players take their seats for Day 3 of the WPT Borgata Championship, their first goal will be to survive the 120 player-bubble. The tournament will recommence with blinds of 2,500/5,000 (ante 500), and the schedule is to continue play until just 27 players remain. Those we expect to be still involved at the end of another gruelling day include: