A dismissal claim by 2 peripheral individuals in Black Friday indictments could have significant impact on the application of the UIEGA regarding online poker. 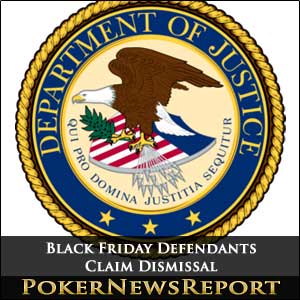 While most industry observers do not expect online poker to be resurrected in the United States in the foreseeable future, a dismissal claim by two peripheral individuals in the Black Friday indictments could have a significant impact on the application of the Unlawful Internet Gambling Enforcement Act (UIEGA) in relation to online poker.

Chad Elie and John Campos were named in the indictments because of their connection with payment processing companies which transacted deposits and withdrawals for Full Tilt Poker, PokerStars and the Cereus Network. Now the two individuals are attempting to have their charges dismissed in what could be a landmark case for [geolink href=”https://www.pokernewsreport.com/us-poker-sites”]online poker in the US[/geolink].

Chad Elie was charged under the indictments on nine different counts – four of violations of UIGEA, three for operating an illegal gambling business in contravention of the Illegal Gambling Business Act 1970 (IGBA), and one charge each for conspiracy to commit bank and wire fraud and conspiracy to launder money.

The lawyer representing Chad Elie has denied these charges, claiming that UIGEA exempts financial transaction providers and that his client was not in the business of providing an illegal gambling business. Furthermore, Elie´s lawyer claims that the wire fraud charge is invalid because the banks actually made money from Elie´s actions, and if the charges against IGBA are dismissed, then so should the claims of money laundering.

Skill is Second Line of Defence

Inasmuch as there are good reasons for dismissing Chad Elie and John Campos from the indictment charges, Elie´s defence lawyer has also indicated that his client will be claiming that poker is a game of skill (as opposed to a game of chance) and therefore not subject to legislation passed under UIGEA and IGBA.

The two defendants will use evidence such as the French Criminal Court of First Instance´s judgement that poker is a game of skill to support their second line of defence and potentially accelerate the process for online poker to once again be permitted in the States. This dismissal claim may just be the boot up the backside the American legislators need to get their act together, and you can follow the poker news outcome from the case on Poker News Report.