Black Friday Daniel Tzvetkoff Gets Off with Time Served

The payment processor who provided the data which led to Black Friday has been told he will not have to serve any further prison time by a US Federal judge. 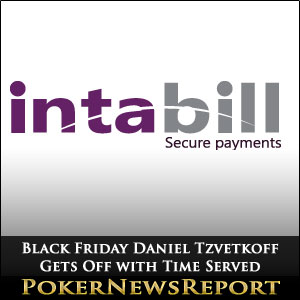 The payment processor who provided the data which led to Black Friday has been told he will not have to serve any further prison time by a US Federal judge.

In April 2010, Daniel Tzvetkoff – founder of the payment processing company Intabill – was arrested by the FBI for violations of UIGEA which included providing a payment processing service to companies such as PokerStars, Full Tilt Poker and Absolute Poker.

The full range of money laundering and bank fraud charges would have meant that Tzvetkoff was facing up to 75 years in jail; but, after spending four months in Brooklyn´s Metropolitan Detention Center, he handed over a substantial volume of documents which gave the FBI the ammunition they needed to force the closure of the three poker sites on Black Friday – April 15th 2011.

The information provided by Tzvetkoff allowed prosecutors in the Southern District of New York to file United States v. Scheinberg et al which resulted in the arrest and conviction of Full Tilt Poker CEO Ray Bitar, Absolute Poker´s co-founder Brett Buckley and two other payment processors Ira Rubin and John Campos. Ira Scheinberg – founder of PokerStars – has to date not returned to the US to face the charges made against him.

After having handed out PokerStars, Full Tilt Poker and Absolute Poker, Tzvetkoff went into the FBI´s witness protection scheme and stayed hidden in New York before being allowed to return under cover to Australia. According to his attorney, Tzvetkoff – who developed his own web design business at the age of 13 – is now working as a chief technical officer for a respectable organization.

In return for providing the information that incriminated PokerStars, Full Tilt and Absolute Poker, Tzvetkoff had the charges against him reduced to one count each of conspiracy and operating an illegal gambling business. Tzvetkoff pleaded guilty to the reduced charges and was yesterday due to be sentenced by US District Judge Lewis Kaplan in Manhattan.

However, after Tzvetkoff´s attorney convinced the judge that the time already served by the defendant constituted a harsh and significant punishment, Judge Kaplan allowed Tzvetkoff off the hook with a $13 million fine and a slapped wrist – peanuts compared to the $100 million he is alleged to have siphoned off from the three online poker companies to fund his lavish lifestyle.

Reaction to the Sentence

The initial reaction to Tzvetkoff´s sentence is that it is extremely lenient. Although the US authorities were obviously keen to catch the bigger fish, Tzvetkoff is estimated to have a significant private fortune which includes a $27 million mansion on Queensland´s “Mermaid Beach” and his own V8 supercar racing team.

A book about Tzvetkoff´s life – “Alligator Blood” – is reportedly being made into a film by director Robert Luketic. It will be interesting to see how Luketic deals with this particular chapter of the supergrass´ life story!