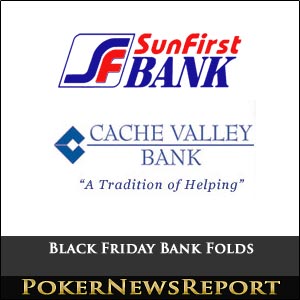 SunFirst Bank, whose co-owner and vice chairman is facing charges in the Black Friday indictments for processing poker player transactions for PokerStars, Full Tilt and Absolute Poker, was closed by Utah regulators, but has reopened as Cache Valley Bank and will remain federally insured.

The demise of SunFirst comes almost seven months following the allegations against John Campos, 57, named in six of the nine counts of the original indictment, as one of 11 men that federal prosecutors charged for participating in a money laundering conspiracy tied to the top three poker companies. Campos is the vice chairman and co-owner of SunFirst.

Campos was initially reluctant to get involved as a third-party payment processor for the [geolink href=”https://www.pokernewsreport.com/online-poker-rooms”]online poker rooms[/geolink], but eventually agreed to facilitate player account transactions in a deal that gave him a $10 million investment in SunFirst Bank. Chad Elie, also charged on all nine counts of the original indictment with money laundering, bank fraud and violating the UIGEA, was part of the scheme that purported to give Elie and an associate a 30 percent stake in the bank’s ownership. Elie allegedly opened “bank accounts in the United States, including through deceptive means, through which each of the poker companies received payments from United States-based gamblers,” according to the Black Friday indictments.

SunFirst is also tied to Jeremy Johnson, another Utah businessman who has his own legal troubles, charged with running a fraud scheme in the ballpark of $350 million that fleeced online customers through his company called iWorks. Several of Johnson’s business dealings went through SunFirst Bank. According to federal authorities, Johnson was responsible for introducing SunFirst to online gaming financial transactions, while Elie assumed handling the technological details of the deal. Johnson has entered a plea of not guilty to a single count of mail fraud.