Bitcoin Conference Set for Next Week

A one-day conference regarding the digital currency Bitcoin will be held at Canary Wharf in London on July 2. 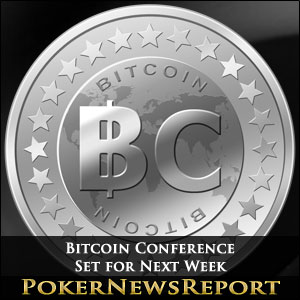 A one-day conference regarding the digital currency Bitcoin will be held at Canary Wharf in London on July 2.

The online poker industry has kept a close watch on the developments surrounding Bitcoin since it emerged as a worldwide Internet currency in 2009. A handful of poker rooms currently offer Bitcoin as a payment processing option. Several others are believed to be considering adding Bitcoin as an alternative form of financial transactions.

There are still many questions focused on Bitcoin that have kept the digital currency from gaining widespread acceptance in the online poker industry. Chief among these are the fact that the value of Bitcoin fluctuates and it is also not a regulated currency.

However, there are numerous advantages to using Bitcoin in online poker. Without full regulation, transactions are made somewhat anonymously. That would allow players to avoid reporting any winnings and be subject to taxation. Also, transaction costs that players currently pay to third-party payment processors are kept to a minimum.

Bitcoin has come under fire in the U.S. as the Department of Homeland Security seized an account at the world’s largest Bitcoin exchange in May. The Japan-based Mt. Gox suffered the seizure for failure to register as a company whose business includes the transmission of funds. Federal authorities in the U.S. are concerned that the lack of regulation of Bitcoin makes it a wonderful choice for criminals who need to launder money.

As a result, Mt. Gox announced earlier this month that a policy to verify Bitcoin usage would be put in place in order to placate the feds who are greatly concerned of Bitcoin’s status as an unregulated means of facilitating financial transactions. But while the U.S. is keeping a watchful eye on Bitcoin, other countries seem in no such hurry to enforce regulation and control.

Less than a week ago, Mt. Gox made the decision to suspend Bitcoin transactions in U.S. currency for a two-week period. An overwhelming number of requests for both withdrawals and deposits in U.S. denominations forced the Bitcoin exchange to upgrade its software in order to keep up with demand. That in itself shows the popularity of the digital currency.

On the state level, the California Department of Financial institutions recently informed the Bitcoin Foundation that any financial transactions within state borders must be fully licensed. The non-profit foundation claims to have nothing to do with transmitting funds and only operates to promote Bitcoin and its usage worldwide.

Next week’s London Bitcoin Conference is an invite-only affair. Its focus will not directly be on the online poker industry, but more on the entire Internet currency industry. And that includes online poker and gambling, as many sites are always on the lookout for more modern and better ways to facilitate financial transactions with their customers.