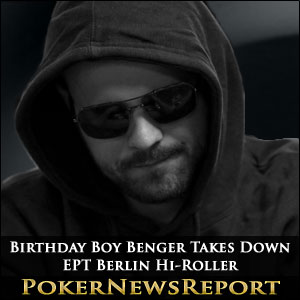 Griffin Benger is enjoying a purple patch in his live poker career. Already the winner of more than $4.3 million thanks to his online exploits, the Toronto resident has already this year popped up at the cashier´s desk at the PCA Caribbean Adventure, the EPT London (three times) and already had one EPT Berlin cash in the bag, when finishing behind Daniel Otto and Chris Moorman in the €2,000 buy-in NL Hold´em side event last week. Now Benger can add the EPT Berlin Hi-Roller to his list of achievements after defeating another up-and-coming star of the live poker scene – Aaron Lim – in the heads-up.

As the seven remaining players took their seats in the climax to the EPT Berlin Hi-Roller, the chip lead was shared by Max Lykov and Martin Kabrhel after the ‘crazy Czech’ (Kabrhel) bluffed the PokerStars pro (Lykov) out of a ½ million chip pot in the last hand of the penultimate day. Griffin Benger was the only other player to amass more than 1 million chips, while the UK´s James Mitchell and Finland´s Joni Jouhkimainen were the players most at risk.

After a slow start, it was James Mitchell who was the first to leave the table, when his three-bet pre-flop shove with ace-jack was dominated by Philippe Ktorza´s ace-queen, and Ktorza was also responsible for the elimination of Joni Jouhkimainen in sixth nearly an hour later, when his pocket Queens held against Jouhkimainen´s pocket Sixes.

Griffin Benger´s rise to the top of the leaderboard started when he made trip Kings on the river to dismantled Martin Kabrhel´s chip stack, before Aaron Lim finished off the ‘crazy Czech’ in fifth position – hitting a Broadway straight on the turn to best Kabrhel´s flopped pair of Aces. Benger increased his stack with trips on the river once again against Max Lykov and, going into four-handed play, the Canadian had more than three million chips in front of him – double the chip stack of his closest rivals.

Thereafter, Griffin Benger could not make a bad call. After Aaron Lim had doubled up against Max Lykov, Benger sent Lykov to the rail in fourth in an ace-nine -v- ace-five hand – Benger flopping the nut flush – and then the Canadian bust Philippe Ktorza in an ace-jack > king-jack race to give him a 6.25 million chip -v- 750,000 chip advantage going into the heads-up against Aaron Lim.

Lim, the recent winner of a WSOP-APAC bracelet, did attempt to put up a fight – doubling up with 10♣ 10♠ against Benger´s K♦ 2♥, but there was a certain inevitability about the result of the EPT Berlin Hi-Roller and, when Aaron Lim´s shove with K♥ 2♠ was called by Benger with Q♣ J♥, you could sense that the end was nigh.

The board ran Q♦ 10♦ A♠ / 4♦ to leave Lim needing a Jack on the river to stay alive in the contest. Fortunately for Griffin Benger, the river card was the K♠ and Benger had made a Broadway straight to become the latest EPT Champion and extend his purple patch as the EPT Grand Finale in Monte Carlo approaches.

103 players entered the €10,000 buy-in EPT Berlin Hi-Roller and after 37 of them re-entered on Day 1, the total prize pool amounted to €1,372,000. Sixteen players cashed in the event, with those who competed at the final table picking up the following amounts:-