PokerStars qualifier Luke Bird was singing sweetly after Day 1B of the UK and Ireland Poker Tour Main Event at the Grosvenor Victoria Casino in London. 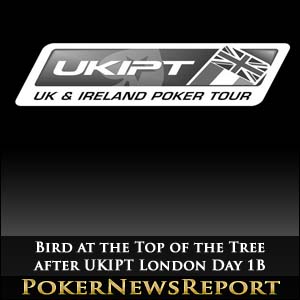 PokerStars qualifier Luke Bird was singing sweetly after Day 1B of the UK and Ireland Poker Tour Main Event at the Grosvenor Victoria Casino in London.

Having doubled up early in the afternoon when turning a straight flush against the unfortunate Khalick Mohanngee (all-in with J♠ J♥), Luke Bird made the most of his enhanced chip stack to finish the day on 196,800 – 900 chips behind Day 1A chip leader Ben Jackson.

Day 1B survivors with their work cut out when they return on Friday for Day 2 of the UKIPT include Kevin ‘ImaLuckSac’ MacPhee and last PokerStars Team Online pro standing Dale ‘Daleroxxu’ Philip – both of whom ended the day with 25,500 chips after eleven levels of play.

Stars Turn Out for UKIPT London

Yesterday at the UKIPT London Main Event was like a who´s who of British Poker´s elder statesmen. John Duthie unfortunately lasted one hand after coming second in a AK < AA race and was soon joined at the bar by Barny Boatman. Jeff Kimber and Sunny Chattha also failed to make it through the day, but there was better news for Keith ‘The Camel’ Hawkins who stayed up past his bedtime to finish with 71,000 chips and Martin Bader – winner of last weekend´s GukPT Main Event – who bagged up 46,700 chips when play concluded just before 1.30am.

The ladies were also out in force. Leo Margets made her PokerStars Pro debut on Day 1B of the GUKPT London, but neither she nor fellow female pro Victoria Coren survived the day. UKIPT Cork final tablist Deborah Worley-Roberts had a tale of woe to relate after running her Full House into Quads and Elena `thegroupie’ Stover bust out running AK into AA just one hand before boyfriend Mickey `mickeydp’ Petersen was eliminated from the tournament – on the same table.

With a capacity field of 450 anticipated for Day 1C of the UKIPT London Main Event, the total number of entrants to the tournament should surpass the 1,000 player mark – making it the largest live poker event ever hosted in London (until ISPT Wembley LOL) and second in the UK behind the UKIPT Nottingham Main Event which attracted 1,625 players.

Players who are known to be in London who have not yet ponied up the £770.00 buy-in include PokerStars Pros Jake Cody and Liv Boeree, and their contributions could swell the prize pool up to three-quarters of a million pounds – quite a bit more than the £250,000 guarantee that was put up for the event.

To date 132 players have made it through to Day 2 of the UKIPT London Main Event on Friday. Those who enjoyed the best of fortune on Day 1B include:-