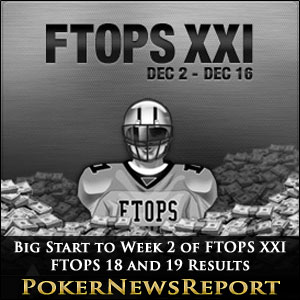 The weekend might be over, and the recreational players all gone back to work, but there are three good reasons for getting involved with today´s action. You would probably have to say that the $1,060 buy-in 6-Max Double Chance NL Hold´em was the star attraction of the day, but it is sandwiched between two valuable tournaments which may be even harder to win considering what has happened so far in the series.

We can see the first of the day´s featured tournaments being incredibly popular. FTOPS #19 is a $256.00 buy-in Knockout PL Omaha Hi/Lo tournament with big stacks (5,000 chips) and long levels (15 minutes, rising to 20 minutes at Level 17). The event should surpass its $75,000 guarantee well before the cards are in the air at 1.00am server time (4.00pm GMT) but, if not, there is two hours of late registration available through to the end of Level 8.

The BIG game of the day is the $1,060 buy-in 6-Max Double Chance NL Hold´em (FTOPS #20) which starts at 14.00pm server time (7.00pm GMT). Plenty of big names and previous FTOPS winners are anticipated to take their chance in this event in which players get 5,000 chips and a token for another 5,000 chips to use by the end of Level 8 – when late registration for the event also closes. There is a guarantee prize pool of $200,000 for this tournament – will it be smashed? You bet it will!

For those who like to play their poker with a little more dash, Monday´s final event (FTOPS #21) is a NL Hold´em Turbo Tournament with 2,000 starting chips and levels of just 5 minutes. A quite laughable $50,000 prize pool has been guaranteed for this $216.00 buy-in tournament which starts at 17.00 server time (10.00pm GMT) and has a late registration period of 30 minutes up until the end of Level 6.

One of the reasons we expect a guarantee-busting Monday is the volume of satellites for today´s three events which were played over the weekend. There are also “last minutes” satellites to today´s feature tournaments which offer guaranteed seats as prizes for those who take part in them.

Early-birds will want to get involved with the satellite to FTOPS #19 which starts at 8.00am server time (1.00pm GMT). The $55.00 buy-in Turbo (not Knockout) PL Omaha Hi/Lo tournament has levels of just 5 minutes (1,500 starting chips) and guarantees 5 seats to the target event. Late registration is available for sleepy-heads, but only through to the end of level 6 – which, in a Turbo tournament, equates to 30 minutes.

Players fancying a crack at the big names playing in FTOPS #20 might wish to enter the last minute satellite which starts at 11.30am server time (4.30pm GMT) and has 5 seats guaranteed to the big game. There will not be any hanging around in this event either, as it is a $216.00 6-Max Turbo NL Hold´em tournament with 1,500 starting chips, five-minute levels and quite steep blind increases.

Twenty seats are guaranteed to FTOPS #21 in today´s final last minute satellite, which is a full-ring Turbo NL Hold´em tournament with a buy-in of $55.00 dollars and which gets underway at 14.30pm server time (7.30GMT). Again players get 1,500 chips to see what they can do with them within the five minutes levels and – again – late registration is open for 30 minutes until the end of level 6. There is the potential for considerable value in this qualifier!

Sunday was a huge day in the FTOPS XXI series with more than $1.6 million won and lost over the two feature tournaments which both attracted huge fields.

The first of the two feature tournaments was a $129.00 buy-in NL Hold´em Knockout which attracted 6106 players – consequently nudging the prize pool over the $600,000 guarantee and offering more than $12,000 in bounties.

After eleven hours in combat, two former USA online poker players battled out the climax of the tournament – Matty “DrewAce34” Levine and Keven “Stammdogg” Stammen – with Levine making the ultimate knockout to capture the $104,412 first prize.

The $750,000 guarantee for FTOPS #18 was absolutely shattered by the 3,487 players who entered (or multi-entered) the $322.00 SuperStack NL Hold´em Freezeout. With such a big field, the tournament lasted best part of 15 hours – with long time leader Dani “Ansky451” Stern finding the cards (K♦ 9♦) when he needed them to overcome the pre-flop aggression of “Just Speechless” in the heads-up.

More than $1 million was distributed in prizes in this event, with deep runs made by Luke “__FullFlush1__” Schwartz, Charlie “chaz_man_chaz” Coombes and, significantly in terms of the Full Tilt Online Poker Series Leaderboard competition, by Bryn “OneUponAStar” Kenney.

Until Bryn Kenney´s impressive finish in FTOPS #18, “callyoudownn´s” fifth FTOPS cash in a week in the Knockout took him to the top of the FTOPS leaderboard. However, with plenty of action still to come in the series, a commanding lead at this stage is no guarantee of success and free entry into the major events in the next series of FTOPS, check them out here, at [geolink href=”https://www.pokernewsreport.com/full-tilt-poker”]Full Tilt Poker[/geolink].