Online poker took second place to the football on Sunday – with many of the feature weekend tournaments failing to reach their guaranteed prize-pools. 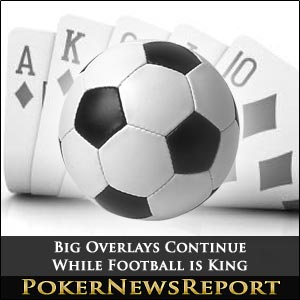 Online poker took second place to the football on Sunday – with many of the feature weekend tournaments failing to reach their guaranteed prize-pools.

It was good news for all the players managing a cash in the Party Poker $200,000 Sunday (9% overlay), the 888 Poker $100K Sunday Challenge (6% overlay) and iPoker´s $200K Guaranteed (13% overlay), as poker players from Portugal, Denmark, Holland and Germany abandoned the Sunday features to cheer on their national teams.

PokerStars had already pre-empted the possibility of a reduced player pool, and halved the price of the buy-ins for their Sunday Majors – with only the $5.00 Sunday Storm failing to hit the guarantee (even though more than 58,000 players entered the game!). However, Everest Poker suffered worse than any other online poker room due to the site´s large contingent of European based poker players.

Those competing in the feature online poker tournaments tonight (Monday) will not witness any more value than a regular Monday night, as Spain and Italy – whose football teams look likely to qualify for the quarter-finals – both have segregated poker player pools; however, online some poker rooms have already made provision for a lower player pool on Tuesday – when England look to book their place in the knock-out stage against co-hosts Ukraine.

No changes are planned to the feature Tuesday tournaments on PokerStars or Party – who failed to reach their $30K guarantee in last Friday´s featured tournament when England played Sweden – but 888 Poker´s Tuesday $109.00 buy-in High Rollers Challenge has had the guarantee cut from $30,000 to $25,000 and iPoker´s $40K guaranteed R/A has been delayed half an hour (now starts at 9.15pm UK time) and allows late registrations throughout the first hour.

Although some online poker rooms may see a slight dip in traffic on Friday evening when Germany play Greece in the second quart-final, the best value next weekend is going to be on the night that England play their quarterfinal game. Assuming that they do no worse than draw against Ukraine tomorrow, England are likely to be playing Spain on Saturday evening (that will keep the .es sites quiet!). If England perform better against Ukraine than the French perform against Sweden, the Three Lions could be playing Italy on Sunday evening – leading to a scenario similar to that witnessed last night.

[geolink href=”https://www.pokernewsreport.com/online-poker-rooms”]Many poker sites[/geolink] have already opened registration for their Sunday feature tournaments and, as the qualifiers for the feature tournaments are also likely to be undersubscribed, it could be a very lucrative week ahead for online poker players seeking value!