Two significant verdicts are anticipated today from courts in Luxembourg and London which could have a major impact on European online poker legislation. 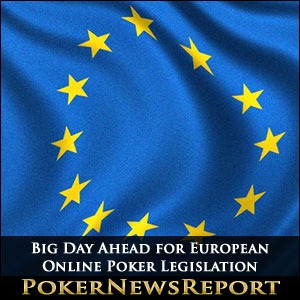 Two significant verdicts are anticipated today from courts in Luxembourg and London which could have a major impact on European online poker legislation.

There will be a lot of attention paid today to news coming from the Court of Justice of the European Union in Luxembourg (CJEU) and the Royal Court of Justice in London (RCJ), where verdicts are expected on two court cases that could impact existing and future European online poker legislation.

Both cases are independent of each other and relate to legislation that has been adopted in Denmark and is about to be implemented in the UK. If the challenges to the legislation are successful, it could change online poker in Europe for both providers of online poker and online poker players.

The first of the cases has a long history. In Royal Scandinavian Casino -v. – Commission (T615-11), a casino in Aarhus, Denmark, is claiming that the lower tax rates charged to online poker operators – compared to the rates charged to brick-and-mortar casinos – is contrary to Article 87 of the Treaty on the Functioning of the European Union.

Article 87 relates to State Aid for the development of certain economic areas within the EU; and it was the area of law that was used in 2011 to persuade European commissioners that Danish authorities could offer aid to online casino operators in the form of reduced tax rates. The Royal Scandinavian Casino is claiming that this is not what Article 87 was intended for and that the commissioners were wrong in allowing the Danish authorities to apply it in the Danish Gaming Duties Act.

If the CJEU find in favour of the Royal Scandinavian Casino, not only would this affect how online poker sites in Denmark are taxed, but the verdict will also have implications for poker legislation in Portugal and the Netherlands, where similar tax incentives are being offered to online poker operators to apply for licences.

With higher taxes to pay, some online poker sites may withdraw from certain European countries, while those who remain will have to increase the rake and fees to play poker in order to cover their increased costs (as has happened in France, Spain and Italy). They are also likely to reduce the value of benefits offered to players such as freerolls, VIP Rewards and other promotions.

The second of the two cases is less complicated. It concerns the Gibraltar Betting and Gaming Association´s legal challenge to the Gambling (Licensing and Advertising) Act which comes into force in the UK on October 1st. The Gibraltar Betting and Gaming Association (GBGA) is claiming that the new legislation is unlawful because it is an illegitimate, disproportionate and discriminatory interference with the right to free movement of services guaranteed by Article 56 [of the] TFEU.

Many well-known poker companies are based in Gibraltar to take advantage of the favourable tax rates offered by the British Overseas Territory, and these companies are claiming that the proposed Point of Consumption tax (15%) being applied to transactions with UK-based online gamblers are contrary to the EU´s rules on free trade.

If the GBGA is successful in its legal action, it will lead to practically all of the Gambling (Licensing and Advertising) Act having to be re-written – if the Act is not scrapped altogether. This will mean that there will be no October 1st changes for online poker operators and online poker players in the UK, and no need to migrate from their existing poker platforms to new ones set up exclusively for UK poker players.

As far as online players are concerned, a successful challenge of the UK´s legislation by the GBGA will mean that poker operators will no longer need to reduce the bonuses and benefits offered to players in the UK (which would have been necessary for remote operators to cover the higher rate of tax they would be paying). However, there are much wider implications of GBGA -v. – UK Gambling Commission.

The UK´s Gambling (Licensing and Advertising) Act is hoped to be the cornerstone on which all future European online gambling legislation will be based. For many years, leading organisations within the industry and regulatory bodies within member states have be calling for the harmonisation of gambling regulations across Europe to repair what is considered to be a patchwork of fragmented and self-interested legislation.

Last year Maarten Haijer – the Secretary General of the European Gaming and Betting Association – wrote in the EGBA newsletter that the organisation was focused on creating a uniformly safe environment for the playing public and equitable treatment for EU-based operators, and the proposed Gambling (Licensing and Advertising) Act was seen as the framework on which pan-European legislation would be developed.

Will that still be the case later today?

UPDATE: Lord Justice Green, presiding over Gibraltar Betting and Gaming Association – v. – UK Gambling Commission, has announced today that a decision on the case prior to 1st October is unrealistic.