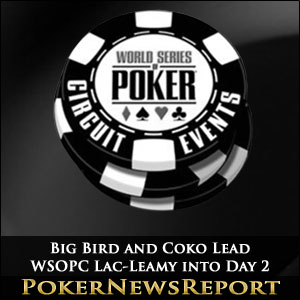 The latest stop on the 2013/14 WSOP Circuit Series is a new venue for the tour – the Casino du Lac-Leamy, in the town of Gatineau, just outside of Montreal – and the $1,675 buy-in Main Event has attracted (to date) 333 players after two opening flights – with late registration available for two levels when Day 2 resumes this afternoon at 1.00pm.

At the top of the tournament leaderboard are two natives of Ontario – Jason Sagle and Francine Cousineau – who bagged up 106,000 chips and 103,000 chips respectively after each finished chip leader on their opening Day 1s. However, they will face fierce opposition from several notable players still remaining in the event; including Mike “Timex” McDonald and Mike “GoLeafsGoEh” Leah.

Due to “participation issues” the later of two opening flights scheduled on Tuesday was scrapped and amalgamated into Day 1A, and the length of the day reduced from twelve 40-minute levels to just nine. Consequently a decent field of 163 players contested Day 1A/1B – including WSOP Bracelet winners Erik Cajelais, Scott Montgomery and Charles Sylvestre – from which 85 survived.

The shortened day did not stop Francine Cousineau improving her starting stack of 20,000 chips into an impressive 103,000 chips by the close of play – while Mike McDonald and Pratyush Buddiga turned up with just two levels to play and had an immediate impact – McDonald finishing the day with 45,100 chips, while Buddiga took down a big pot in the final level of play A♣ K♦ > A♦ 10♠} to bag up 37,900 chips.

Day 1C provided the opportunity for players who had bust out of Day 1A/1B to re-enter the WSOPC Lac-Leamy Main Event and have another stab at the big prize and Circuit ring. WSOP bracelet winners Charles Sylvestre (90,500 chips) and Erik Cajelais (34,000 chips) both used the opportunity well (the third bracelet winner from Day 1A/1B Scott Montgomery survived the opening flight), but it was not such good news for Yann Dion and Matt Marafioti, who both fired second bullets and failed to finish the day.

Jason Sagle finished Day 1C at the top of the chip counts, and other players who enjoyed a fruitful day included Carla Sabini – who cashed in the recent EPT London High Rollers Event and the EPT London Main Event – and Marc-Andre Ladouceur, who drove overnight from Montreal to play in the WSOPC Lac-Leamy Main Event, got knocked out as soon as he arrived by Erik Cajelais, bought back in straight away and finished the day slightly above his starting stack.

Day 2 of the WSOPC Lac-Leamy Main Event should consist of another nine levels of play. Late registration is open during the first two levels and a couple of live satellites were played at the casino last night, so the final number of entries should top 340. Blinds for Level 10 are 400/800 with a 100 chip ante, so players re-entering today will have twenty-five Big Blinds to play with in an attempt to prise themselves into the top ten chip counts:

Footnote: Casino Lac-Leamy is a government run casino and, despite being part of the British Empire (!), uses French playing cards. Consequently a King is a “Roi”, a Queen is a “Dame”, and a Jack is a “Valet” – often abbreviated to “R”, “D” and “V”.