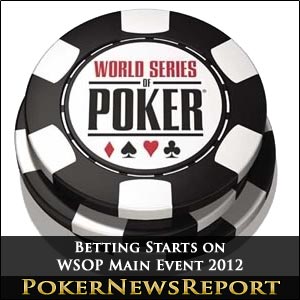 Bwin are the first online sports betting company to have opened a book on the WSOP Main Event which starts on Saturday 7th July.

The company is offering odds on a limited number of players on a win-only basis with Phil Hellmuth marked up as their early favourite (40/1).

Also featured in the market are Phil Ivey (50/1), Chris Ferguson (50/1) and Doyle Brunson (66/1), while the final three in the 2011 WSOP Main Event – Pius Heinz, Martin Staszko and Ben Lamb – are all priced at 100/1. Among the 19 players for who prices are currently available, there are a couple of surprises:-

No doubt these odds will change when other bookmakers open their books on the event and offer more competitive odds or each-way terms, but if you cannot wait to get your money on Ram Vashwani, or any other of the players competing in this year´s WSOP Main Event, here is the full list of prices (correct as at 24 May)