Poker fans will be able to bet on their favorite pros in the 2012 WSOP Main Event, as Matchbook.com has announced betting markets on the top poker players. 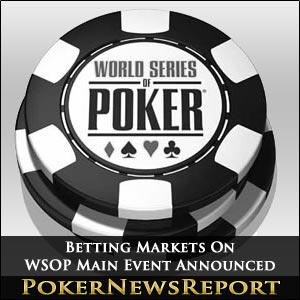 Poker fans will be able to bet on their favorite pros in the 2012 WSOP Main Event, as Matchbook.com has announced betting markets on some of the top poker players in the world.

With the World Series of Poker Main Event scheduled to begin July 7, Matchbook.com has posted betting markets on the tournament, allowing poker fans to back or wager against various big-name poker pros.

The markets feature betting on whether or not a player will finish in-the-money, with action on 10 players currently available at various odds. For instance, BIG ONE For ONE DROP champion Antonio Esfandiari is listed at +460 to cash and -630 not to cash, while action on runner-up finisher Sam Trickett can be wagered at +410 to finish in-the-money and -560 not to cash.

The $10,000 buy-in Main Event will run until July 17 and play will be halted until resuming for final table action in October. Last year’s winner, Germany’s Pius Heinz, who took home $8.7 million, is priced at +450 to cash and -610 to finish out of the money. All-time bracelet leader Phil Hellmuth, who will be going for his 13th piece of WSOP gold jewelry in the Main Event, is posted at +430 to cash and -490 to miss a payday in this year’s tourney.

Phil Ivey is expected to play in the 2012 Main Event after sitting out last year due to the Full Tilt debacle and his sponsorship deal with the dormant site, saying at the time, I am deeply disappointed and embarrassed that Full Tilt players have not been paid money they are owed. I am not playing in the World Series of Poker as I do not believe it is fair that I compete when others cannot. Full Tilt players have still not been paid, but hope is on the horizon, with Full Tilt CEO Ray Bitar surrendering to federal authorities earlier this week amid speculation that returning to the U.S. and facing the charges against him is part of the process required in order for PokerStars to acquire Full Tilt and players to be reimbursed. Action on Ivey is set at +375 to cash and -540 to not cash.