BetOnline has reduced the qualifying criteria for its Bad Beat Jackpot to give players a better chance of winning a lion’s share of the $1 million prize pool. 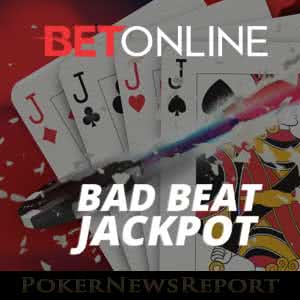 BetOnline has reduced the qualifying criteria for its Bad Beat Jackpot to give players a better chance of winning a lion’s share of the $1 million prize pool.

Since it was launched almost two years ago, BetOnline Poker’s progressive Bad Beat Jackpot is won on average once every three months. Back in March, the Jackpot was won twice within a week – which didn’t necessarily mean there would be a six-month wait for the next Jackpot win, but that´s how things appear to be working out.

Due to long win-less streak, the Jackpot prize pool has grown to more than $1 million ($1,066,675 at the time of writing) and – as the site has done before – BetOnline Poker has reduced the qualifying criteria to make the Jackpot easier to win. Now, when any player has their Quad Eights or better beaten at showdown, every player seated at a Jackpot table will share in the prize pool.

How the Bad Beat Jackpot at BetOnline Poker Works

BetOnline Poker has a standard set of rules for its Bad Beat Jackpot. Players qualify for a share of the prize pool if they are seated at a specially designated Jackpot table with four or more players dealt into the hand when a player suffers a bad beat with a qualifying hand. Both the winner and the loser of the hand must include both hole cards in the winning/losing hands, and the hand must go to showdown.

How the Prize Pool is Divided when the Jackpot is Won

The Bad Beat Quandary: To Play Full Ring or 6-Max

One of the most noticeable things about the cash game action at BetOnline Poker´s Jackpot tables is that there are many more players sitting on Full Ring (9-handed) tables than at 6-Max tables. Mathematically it is more likely that a Bad Beat will occur with more players dealt into the hand; but, at a 6-Max table, you are likely to be dealt into more hands per hour.

If you have played at BetOnline Poker before, but not visited the site for a while, BetOnline is currently offering players a 100 percent reload bonus on deposits up to $1,000. The reload bonus comes with a free tournament ticket of up to $120 depending on the amount of the deposit. However, you will have to act quickly if you want to take advantage of this promotion as it finishes on October 31st.