BetOnline Poker has launched a Steps Sit & Go promotion that enables players to qualify for its forthcoming $50K guaranteed event from as little as $0.20. 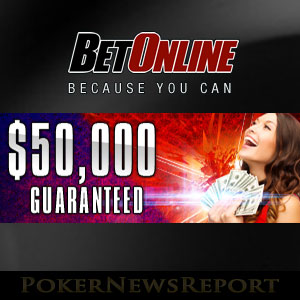 BetOnline Poker has launched a Steps Sit & Go promotion that enables players to qualify for its forthcoming $50K guaranteed event from as little as $0.20.

On March 27, BetOnline Poker will be hosting one of its most valuable poker tournaments of the year so far – a $50K guaranteed event with a $99.00 buy-in that guarantees the winner of the tournament a minimum first prize of $16,000. The tournament gets underway at 7:00pm (ET – late registration will be open for 50 minutes) and will have unlimited re-buys for the first hour followed by the option of an add-on.

For a lot of players, a $99.00 rebuy and add-on tournament is a touch too far for their bankrolls. So, BetOnline is offering a Steps promotion into the event in which players can qualify for as little as $0.20. As the prizes in the Steps promotion are paid in Promo $ – which can also be used to fund re-buys and add-ons – there is every incentive for players intending to play in the target tournament to qualify multiple times.

How the $50K Steps Promotion Works

The BetOnline Poker $50K Steps Promotion consists of four stages – all of which are 6-Max Sit & Go games. The first Step has a buy-in of $0.20, 20 promo $ or 40 POP Points (the currency used in BetOnline Poker´s Rewards Program), and both the winner and the second placed player in the game get 60 Promo $ to enter Step 2.

Whereas Step 1 and Step 2 Sit & Go games are pretty much running around the clock, Step 3 and Step 4 games are a little harder to populate. Consequently BetOnline Poker is running a complimentary promotion to reward the winners of certain tournaments with Emeralds so that they can leap straight into the higher levels of the Steps Promotion. There are two levels of tournaments in which players can win Emeralds:

Each of the Bronze and Silver Tournaments have guaranteed prize pools ranging from $25.00 to $750.00 and are sure to be well subscribed with the added incentive of a potential seat in the $50K guaranteed event on Sunday March 27. Please note that the Bronze and Silver Tournaments only run until Friday March 25, although the Sit & Go qualifiers will continue to run up until the start of the target event.

The Steps Promotion and Bronze and Silver Tournament Promotion are just two of the superb promotions being hosted at BetOnline this month. In addition to an $8,500 three-level MTT leaderboard competition and a $25,000 Sit & Go leaderboard competition, the site is hosting a “March Madness” rake race in which players can win unlimited cash prizes – even if they start now!

New players are also treated to a first deposit bonus of 200% up to $2,500 and allowed 120 days in which to clear it. You can read more about this exceptional offer and the BetOnline Poker bonus code to use to qualify for the first deposit bonus in our BetOnline Poker review. Alternatively you can head straight over to the site by clicking on our link below to start your quest for a seat in the $50K guaranteed tournament on March 27.