Jose Vincente Besalduch and Adrian Bussman were the respective winners of the WPTN 500 and WPTN High Rollers at the Casino Cirsa in Valencia this weekend. 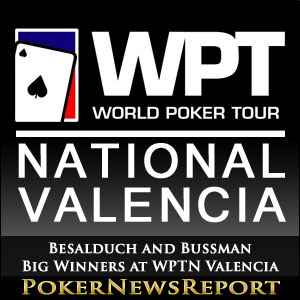 Jose Vincente Besalduch and Adrian Bussman were the respective winners of the WPTN 500 and WPTN High Rollers at the Casino Cirsa in Valencia this weekend.

The World Poker Tour visited Spain this weekend, with the WPTN 500 and WPTN High Rollers climaxing the Valencia Poker Festival. The WPTN 500 was the first of the two events to get underway, and 176 players qualified online or ponied up the €550.00 buy-in to take part on the two opening flights last Thursday and Friday.

The bubble burst late on Saturday night when Warret Rachid moved the last of his chips into the middle with pocket Kings and he received a call from Toni Lazo – who had A♥ 5♣. Cruelly for Rachid three hearts were dealt on the flop, and a fourth on the Turn – signalling his departure from the event and leaving the remaining twenty-one players in the money.

After the habitual “double-or-bust” post-bubble action, thirteen players returned on Sunday to conclude the Valencia WPTN 500; and, at the start of Level 23 (blinds 10,000/20,000 – ante 3,000) the eight-handed final table was set when chip leader Jose Vincente Besalduch sent Juan Mecho to the rail in ninth with a flopped set of Eights against Mecho´s A♠ 10♥.

Chapi and Garcia Unlucky to Bust so Soon – Besalduch the Buster

With the final table being decidedly top-heavy with chips, it was not long until the short-stacked players found themselves under pressure. Jose Vincente Besalduch extended his chip lead by busting Isaac Chapi in eighth place (Q♠ J♠ > A♦ 8♦ after hitting a runner-runner flush), and Miguel Angel Garcia in seventh place – after Garcia had made a Full House of Eights > Queens, but Besalduch had flopped a better Full House of Queens > Sixes.

Antonio Ross was eliminated in sixth place when his J♦ 9♦ failed to complete its flush draw against Toni Lazo´s paired K♥ Q♦, Marco della Tommasina chose the wrong moment to move all-in with Ace-Jack – running into Jose Vincente Besalduch´s Ace-King and falling in fifth place, and Besalduch made it four final table eliminations out of five when Antonio Moreno´s King-Jack failed to improve past Besalduch´s Ace-Jack to be eliminated in fourth place.

Jose Vincente Besalduch´s dominance at the final table was tempered early during three-handed play when he doubled up Alex Kalfa pocket Jacks over pocket Nines, but he still had a substantial chip advantage (2.3 million chips) over Kalfa (1.5 million chips) and Toni Lazo (1.4 million chips). With blinds now at 15,000/30,000 (ante 5,000), the game could have gone on for a considerable period of time, but then this happened:

Following the flop of A♠ 8♦ 3♣, Alex Kalfa moved all-in with 8♣ 4♥ and was called by both Toni Lazo (8♠ 9♣) and Jose Vincente Besalduch (A♥ K♣). Following the Turn of K♥, Besalduch put Lazo all-in, and Lazo – knowing he was good for second if Besalduch won the three-way hand – made the call. The River failed to produce the one-outer (8♥) Lazo needed to survive, and Jose Vincente Besalduch had bust his final two opponents in the same hand to win the WPTN 500 in Valencia.

By comparison to the good turn-out for the WPTN 500, only seventeen players ponied up the €1,500 buy-in for the WPTN High Rollers. At the end of Day 2, just six players remained – headed by Australian Nicholas Galtos – and, after Thomas Bayo had been sent to the rail by Jacob Karlsson´s trip Threes and Paul Testud had been eliminated in fifth place by Imad Moumen (9♣ 9♠ > K♥ 7♥), a long period of nervous play ensued to determine the three players that would be in the money.

Eventually Jacob Karlsson became the WPTN High Rollers Bubble Boy, when his Ace-Jack failed to improve against Adrian Bussman´s pocket Deuces – putting Bussman into second place with 312,000 chips behind Imad Moumen (410,000 chips), with Nicholas Galtos being the short stack with 120,000 chips and blinds now at 5,000/10,000 (ante 1,000).

Adrian Bussman moved into the chip lead when hitting a set of Nines against Moumen´s two pairs, and he eliminated Nicholas Galtos in third place after Galtos had seen his chip stack decimated by Imad Moumen´s set of sixes against the Australian´s paired K♥ 3♥ – Bussman taking a 530,000 -v- 320,000 chip advantage into the heads-up against Imad Moumen.

The conclusion to the WPTN Valencia High Rollers came quickly – Imad Moumen moving all-in on the flop of 6♦ J♠ 8♥ with a paired six, but Adrian Bussman holding the J♥ 9♣ for the superior pair. The Turn and River both blanked for Moumen, giving victory to Bussman for €10,700 to compliment his fourth place finish in the EPT Vienna High Rollers event in March this year.